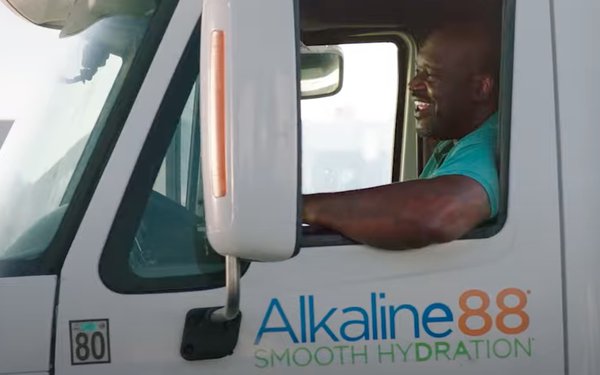 Founded in 2012, The Alkaline Water Company has achieved distribution in more than 75,000 retail doors.

Yet until last month, the Arizona-based player in the enhanced/value-added water category had spent nothing on advertising to promote its Alkaline88 brand.

Other recent hires include heads of ecommerce and on-premise distribution—the latter for such venues as gymnasiums, hotels and restaurants.

More importantly, in May of this year Alkaline88 began a three-year brand ambassador deal with former pro basketball star Shaquille O’Neal, who has an equity stake in the company.

In this spot from the Davis Elen agency that broke last month, O’Neal poses as Alkaline88 truck driver Al Kaline. The company says that since the addition of O’Neal its social media following has grown by about 35%.

Over the next 12 months Alkaline expects to increase its store count by 15%-20% and recently gained a presence in nine major airports and 800 gym and fitness centers, according to a recent management presentation.

The company also has a footprint in the growing CBD-infused beverage sector.

When CPG FYI interviewed Hutchison a few weeks ago, he was in his fourth month at Alkaline. In the following Q&A, edited for brevity and clarity, he talks about the Shaq impact and the brand’s continued expansion plans.

CPG FYI: Just to be clear, Alkaline88 actually went for the better part of a decade without advertising?

Hutchison: That’s right. We actually didn’t have a marketing team at all until about 16 months ago. We had our own social media accounts but didn’t even do any paid social. It was all just posting by ourselves.

CPG FYI: So how does a brand gain all the distribution that you have without traditional or even digital ads?

Hutchison: Part of it was our go-to-market strategy. We led with a gallon container and got placement as the only alkaline water in what I’ll call the bulk water section of the water aisle. There wasn’t a lot of competition for that. Everyone else wanted to play in one liters and below. We weren’t fighting for it.

CPG FYI: How about going forward?

Hutchison: As we look to the future, the low-hanging fruit isn’t there as much as it was. So that’s when it becomes more about leveraging Shaq to help generate retail excitement. The questions are now coming from retailers about how we are going to support generating demand via advertising—and now we have a good answer. We have a budget, a team and a fantastic agency of record.

CPG FYI: What has been the immediate impact of the partnership with O’Neal?

Hutchison: This is a dream scenario. Shaq is well above and beyond everyone else in terms of being a great partner who really leans into the brand—and not just in marketing and influencing consumers. Until October, all we did with him was work on trade relationships. He’s called a lot of buyers and has influenced a number of different retailers to take us on or expand our presence.

CPG FYI: Why did you recently expand your ecommerce offerings in a deal with the Ohi fast-delivery platform?

Hutchison: We sell through Amazon, Walmart.com and all of our retailers’ ecommerce platforms, but sales through our own websites we were fulfilling in-house. It’s highly costly and you don’t always have the best customer solution. Ohi allows us to deliver to consumers in New York City and Los Angeles faster. If consumers in one of these markets order one of four products it will give them same-day, next-day or two-hour delivery.