The Most Ethical Column I Will Ever Write 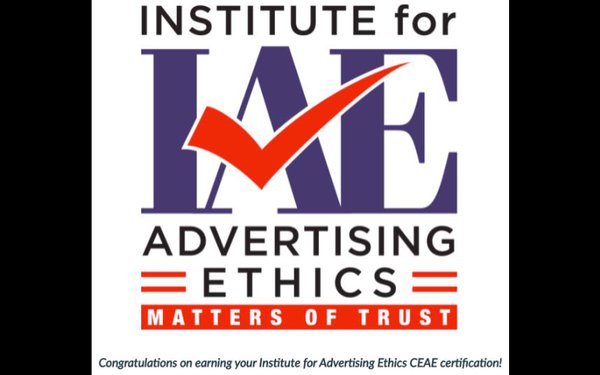 I've always considered myself an ethical journalist, especially when it comes to covering the ad industry, but now I can assert that I am certifiably so. That's because I'm the first ad trade journalist -- and from what I can tell -- the first journalist of any kind, to have been certified as an ethical professional.

I received my certification from the Institute of Advertising Ethics (IAE), which has begun rolling the program out, and from what they tell me, I'm the first journalist to complete it. And while it didn't school me explicitly on how to cover the ad industry ethically, at least I now know what makes for an ethical advertising pro.

I took the course to experience it firsthand as part of a straight news story running in today's MediaDailyNews, and I will tell you much of it seems pretty obvious and something we can probably all agree on, but there were some technical areas -- especially in the rapidly shifting areas of law, regulation and compliance around potential ethical liabilities, such as misuse of consumer data, etc. -- that are a little challenging.

I had to repeat some sections a couple of times in order to get it right, and even then there were a couple I simply couldn't answer. In the end, I got a 97% score and the right to call myself an ethical advertising pro, although I don't actually make ads or plan or buy media.

The process made me wonder why there is no professional certification program for journalists -- either business or consumer ones -- especially now, at a time when so much questionable reporting, and reporting practices, seems to be taking place.

Like the IAE, the Society of Professional Journalists does have a published "Code of Ethics" and they are pretty good, although basic principles based on reporting the truth, minimizing harm and being accountable and transparent about what you report, but if I would suggest that for the same reasons the IAE established a certification program for advertising ethics, it's high time the journalism industry did the same thing.

Ironically, one of IAE President Wally Snyder's foundational principles is that "advertising has the same obligation to serve the public that editorial does." It's ironic, because advertising at least now has a process for certifying that obligation, while journalism does not.

advertising, journalism
5 comments about "The Most Ethical Column I Will Ever Write".
Check to receive email when comments are posted.
Read more comments >
Next story loading