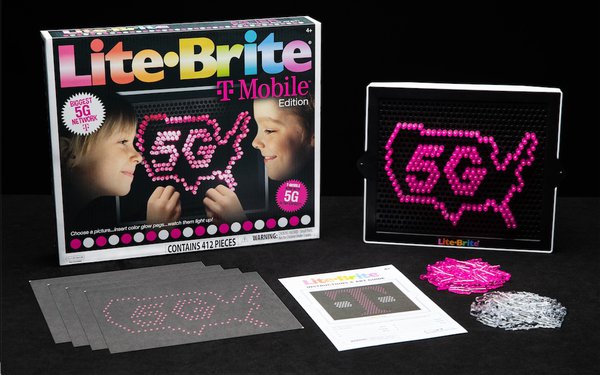 Toys from the 1960s continue to mine nostalgia for brand tie-ins.

The $19.99 product, featuring 200 Magenta-colored pegs (over 400 pegs in all) that produce four different glowing designs via custom T-Mobile design templates, is available through Cyber Monday only from t-mobile.com/5GLiteBrite. Shipping is free.

The templates include a map of the U.S. with the words “5G” inside, a “T” logo, a cell phone, and a cell phone tower. Replacement templates are also available from the site.

In addition, four of the Lite-Brite boxes will include a “Magenta Ticket,” good for a “5G Experience of a Lifetime.” This includes an all-expenses-paid trip for two to an event at T-Mobile Arena in Las Vegas, T-Mobile Center in Kansas City, or T-Mobile park in Seattle; two smartphones with a free year of Magenta service; an HD TV set; and a free year of home Internet service.

News of the T-Mobile/Hasbro tie-in will be broadcast through both companies’ social channels, the product has been sent to social influencers, and it will be featured at activations and events over the next few weeks, including the SEC Championship this weekend and the Qualcomm Snapdragon Summit.

T-Mobile, which recently announced that its 5G service now covers 308 million people nationwide with Extended Range and 200 million people with Ultra Capacity, has been on a joint marketing limited-edition tear this year, with previous efforts including a Take 5G candy bar with Hershey’s Reese’s, 5Ginger Beer with Jones Soda, and 5Gin with Heritage Distilling.

Like Chatter Telephone, Lite-Brite  has never gone away. Now manufactured under license by Basic Fun, the “Ultimate Classic” edition is available at such stores as Target and Walmart for as low as $12.00. And Basic Fun’s Lite-Brite Oval HD, with a different shape and more peg holes, was recently named a holiday 2021 favorite in the DIY category by Toy Insider. It lists for $19.99 at such retailers as Target and Amazon.