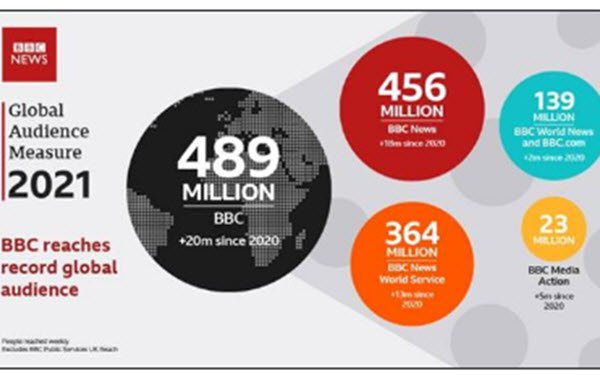 The British Broadcast Corporation (BBC) has logged an average global audience of 489 million in the 2020 and 2021 year-to-date period, according to Global Audience Measure (GAM).

GAM measures and annually updates how many adults are consuming the BBC weekly across all services in all countries across all platforms (television, radio, website and social media) on an unduplicated basis.

The latest total viewership number — which is up by more than 20 million from the 2019 to 2020 period — allows the BBC to continue to claim to have the highest-ever global audience, according to its announcement.

The number also puts the media outlet close to its 500 million goal for 2022, which will mark its 100th anniversary.

The BBC World Service, which includes language services and World Service English, has been a focus of BBC investment (including digital) and a key audience growth driver in India, Africa and the Middle East in particular.

That service accounts for the largest share of BBC’s global reach: 364 million on a weekly basis — up by 13 million in the previous period.