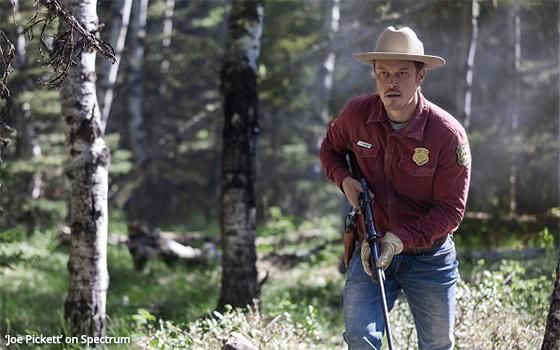 Spectrum’s new contemporary western series “Joe Pickett” is a sign that the quality of the content emanating from the cable company’s Spectrum Originals unit just might be on the upswing.

Not that the TV Blog is the last word (or even the first word) on the creative pros and cons of the Spectrum Originals TV shows to date, but the record here is checkered.

The TV Blog panned the first one of these, the woeful female, buddy-cop show called “L.A.’s Finest.”

Sometime after that, the TV Blog was dismissive of Spectrum’s reboot of the ’90s sitcom “Mad About You” with original co-stars Helen Hunt and Paul Reiser, who were now 20 years older.

However, that show was not technically an “original” since it was imported from England, where it airs first.

But where “Joe Pickett” is concerned, the world “original” actually does apply. Or at the very least, this show’s location, characters and story represent a welcome change from all of the run-of-the-mill police-action dramas seen everywhere else.

The last series I can recall that was anything like “Joe Pickett” was another western lawman series, “Longmire,” about a crime-fighting sheriff in rural Wyoming.

“Joe Pickett,” which starts streaming on Monday (December 6) on Spectrum, also takes place in Wyoming, somewhere in the vicinity of the Grand Tetons.

But the lawman of the title is not a sheriff. He is the county’s new game warden, played by Michael Dorman (pictured above).

There are other lawmen in this neck of the woods, but a game warden evidently sees plenty of action too.

In Episode 1, we meet Officer Pickett, his wife and his young daughters who are becoming acclimated to their new home and surroundings.

We also learn about Warden Pickett’s demons, apparently stemming from a harrowing, violent childhood. We pick up this background data through flashbacks and the game warden’s dreams, which crop up several times in the premiere episode.

As in many of these kinds of small-town law dramas, some of the local folk are salts of the earth, while others are not so savory.

It is the latter group with whom Warden Pickett locks horns, which makes sense because if that didn’t happen, there would be no show.

This storyline heats up pretty quickly in the premiere episode. In fact, Episode 1 ended in such a way that I wished to watch Episode 2 almost immediately.

However, as happens frequently in journalism, duty called. And instead of watching another hour of “Joe Pickett,” I felt fully equipped to write this TV Blog and tell others about it.

I had already formed the opinion I would express here anyway, regardless of whether or not I continued my preview of the show. Simply put, this new Wyoming mountain drama is a breath of fresh air.