Are PFPs The Next New Thing In Branded NFTs? 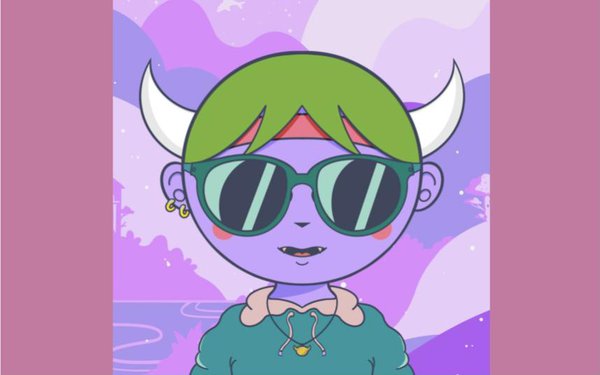 Oki’s World is one of the newest projects aiming to compete in the still-blossoming world of NFT collections, otherwise known as “PFP” (ProFile Pictures) NFTs.

But what does this mean exactly? How are PFPs different from regular NFTs? And what does it mean for marketers?

The first PFP NFT –– CryptoPunks –– launched in 2017 and was used by early crypto specialists in their social media profiles, most commonly on Twitter.

Originally released for free, the 10,000 available CryptoPunk NFTs quickly took on serious monetary value. In March of 2021, CryptoPunk #7804 sold for 4,200 Ethereum (ETH), or 7.5 million USD. Since then, the punks have been resold for even more.

PFP projects don’t have the same goal as the typical NFT. Due to the release of thousands of NFTS simultaneously, all following a fixed set of data, PFP projects move beyond an individual piece of digital artwork.

Each NFT becomes a unique collectible that is part of a larger series, which also tends to involve a collaborative experience. One might argue that this alone garners a community among collectors.

Oki’s World adheres to the basic principles of a PFP project. It offers collectors access to an exclusive messaging channel on Discord, licensed commercial rights for each NFT (so collectors are able to expand the world, so to say, and profit off of it), and the recurring release of exclusive content.

In the end, PFP projects like Oki’s World invite collectors to buy into a brand and expand it on their own terms.

In this way, Oki’s World is following in the footsteps of the billion-dollar ecosystem of cartoon apes known as Bored Ape Yacht Club, one of the most exclusive PFP projects to date. BAYC began with 10,000 unique Ape avatars (just like CryptoPunks) priced at 0.08 ETH, about $300.

Last summer, one token sold through Sotheby's for $3.4 million. What truly set BAYC apart was the ability for collectors to meet in the metaverse, at a 3D virtual club run on ETH, where they technically live through their individual Ape NFT avatars.

Muralist and entrepreneur, Kent Yoshimura, also known as Kentaro, cofounded Oki’s World with Jonathan Calmus. According to their website, Kentaro’s mission was to focus on public art and story-driven NFTs, finding a way to merge the physical and digital worlds together through a community of like-minded Okis.

The ways in which Oki’s World is trying to stand out in the hyped reality of PFP NFTs is this focus on a continuous storyline, and its decision to blend digital art into real life spaces.

Following the basic through line of Siddhartha, Oki’s World encapsulates an animated story of a boy with horns who discovers a peculiar cube that changes the course of history forever. The first chapter was released on November 23rd. It was narrated by Young the Giant frontman, Sameer Gadhia, who is just one of nine or so musicians, visual artists, entrepreneurs, and folks recently featured in the Forbes 30 Under 30 list contributing to the project.

Oki’s story is made up of five chapters, with each chapter tied to the release of more unique Oki NFTs. 5,000 became available for purchase (at 0.08 ETH) with Gadhia’s introductory chapter; 1,200 will be available in Drop 2, 1,500 in Drop 3, 1,000 in Drop 4, and only 500 in Drop 5. Murals (the first of which appeared last week on a street in Los Angeles), original music, and animations will accompany each drop.

“We’re injecting soul into NFTs––the art, story, music, murals, animation...it's an entire universe. And with Oki holders having full access to the creative assets and tech, our community has the capability to expand Oki's World infinitely,” said Kentaro in a recent statement.

One of the most interesting things about Oki’s World is its incentive for collectors to stay involved. When Oki collectors want to create their own Oki-related project using the commercial rights granted to them on their first purchase, they must propose it to the whole community via a digital launchpad. This is where it helps to own more Oki NFTs and rarities, as they provide collectors with greater voting power.

What does this mean for advertisers? Well, it helps to look at how NFT collections like Bored Ape Yacht Club or Oki’s World are asking collectors to invest in a unique brand with constant engagement and community. The world of NFTs, even if it ends up being a fad, has already provided new ways for brands and marketers to connect with their audiences.

The NBA, for example, made headlines after releasing “NBA Top Shot,” an online marketplace of licensed digital NFTs where fans can purchase moments of their favorite teams––a new take on the pastime of trading collectible cards. State Farm, an insurance company, recently devised an AR treasure hunt that incentivized football fans to search college campuses for virtual footballs containing NFTs to keep or sell.

These digital assets could play a part in future virtual platforms (aka the metaverse) as well. Coca Cola released their iconic delivery jacket as an NFT collectors can wear in a 3D virtual reality platform. Nike created a virtual locker called “Cryptokick” which stores a digital NFT version of the pair of shoes a consumer bought in real life. The digital shoes can then be uploaded to sneaker forums or used on video-game characters.

It’s helpful to see the branding of NFTs through an emotional and financial lens. Consumers may feel more invested in a brand if they are given tokens that are both culturally relevant with the potential to rise in value.

It’s hard to say if Oki’s World will catch on, as Tuesday marked the first day collectors were invited to bid on specific Oki avatars, but the emphasis put on storytelling, community, and shared-ownership in the digital and virtual world paints a strange but likely picture of the future of media.