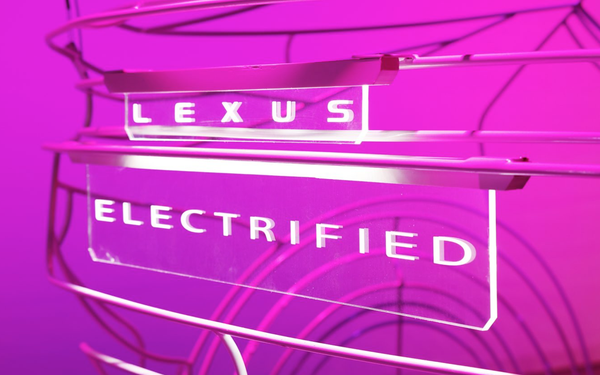 Lexus and BMW are among the brands with activations at Design Miami and Art Basel Miami Beach.

Lexus unveiled an installation titled ‘ON/’ at Design Miami, which presents the vision of Germane Barnes and his team at the University of Miami  inspired by the power and potential of Lexus’s LF-Z Electrified concept car.

The immersive activation embodies the human-centered, future-oriented approach to design and craftsmanship that the automotive brand and Barnes share, its title alluding to an on/off switch as a vision of a carbon-neutral future powered by electric technology, according to the automaker.

The installation is centered around a precisely-to-scale, 3D rendition of the LF-Z Electrified concept car rendered in steel and illuminated with embedded LED lighting. The frame of the car glows and is suspended just above the ground.

It is Lexus’ fourth year of partnering with the design fair, which is running Dec. 1-5.

The project has given the automaker the chance to highlight its commitment to electrification while working closely with the students who represent the future of design and innovation, says Brian Bolain, Lexus’ global head of marketing.

Meanwhile, BMW returns as an official partner of Art Basel in Miami Beach for 2021 as the fair resumes in-person activities Dec. 2-4.

The automaker held the official world premiere of the BMW Concept XM, a high-powered, hybrid-electric concept vehicle, during a performance by Grammy-award winning hip-hop artist Nas on Nov. 29.

Art Basel in Miami Beach is a fitting environment for launching the concept car which was matched perfectly to the expressive artwork of the BMW’s partner artists, says Uwe Dreher, vice president of marketing, BMW of North America.

Following the event, the BMW Concept XM was moved to the Miami Beach convention center.

BMW is a long-term global partner of Art Basel, supporting the institution’s fairs in Basel, Switzerland; Hong Kong; and Miami Beach. In addition to their event partnership, Art Basel and BMW founded the BMW Art Journey in 2015, an initiative to support emerging to mid-career artists.