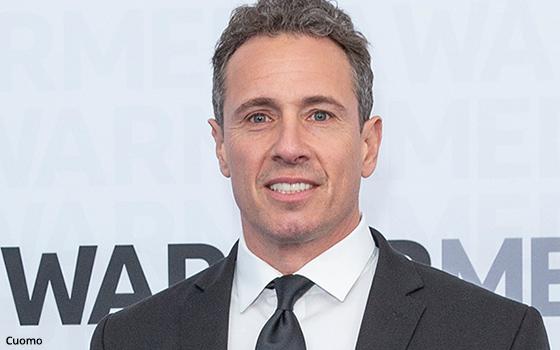 “We retained a respected law firm to conduct the review and have terminated him, effective immediately,” CNN has said in a statement. “While in the process of that review, additional information has come to light.”

While CNN did not disclose details of the additional information, it added: “Despite the termination, we will investigate as appropriate.”

This comes after a story in The New York Times on Saturday cited an allegation of sexual misconduct against Chris Cuomo -- information CNN received on Wednesday, according to the newspaper. CNN told the Times it already had caused to fire Cuomo before the news was disclosed.

A representative for Chris Cuomo, speaking to The New York Times, denied the allegation.

The Cuomo-hosted “Cuomo Prime Time” at 9 p.m. had been CNN’s No. 1 regularly scheduled show in prime time in terms of viewership -- but coming in well behind Fox News Channel's “Hannity” and MSNBC’s “The Rachel Maddow Show” in the time period. In November, "Cuomo Prime Time" was at 791,000 Nielsen measured viewers; "Maddow", 2.1 million; and "Hannity", 3.23 million.

Earlier in the week, CNN announced Michael Smerconish, a CNN Saturday-morning host, would fill in for Cuomo during the 9 p.m. hour next week.

Cuomo posted a statement on Twitter on Saturday: “This is not how I wanted my time at CNN to end, but I have already told you why and how I helped my brother. So let me now say as disappointing as this is, I could not be more proud of the team at 'Cuomo Prime Time' and the work we did as CNN #1 show in the most competitive time slot. I owe them all and will miss that group of special people who did really important work.”