Hims Wants You To Have A Happy, Sexually Active Holiday Season 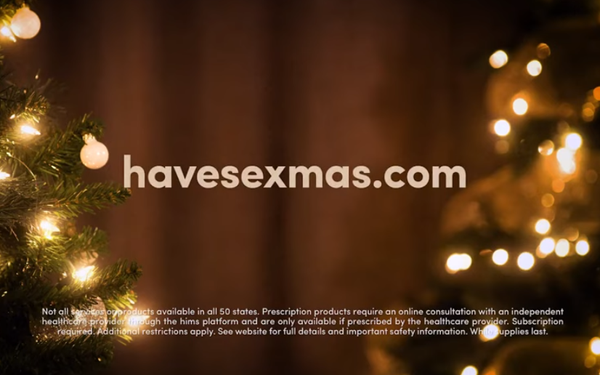 What looks like a standard Christmas ad turns into something a bit risqué in telehealth brand Hims’ new ad for those with erectile dysfunction.

The ad, via Ryan Reynolds’ ad agency Maximum Effort, shows a man’s hand opening an advent calendar of sorts. As he opens a drawer each day, he gets chocolates until December 25, when he gets a blue Viagra pill. “Unwrap each other this year,” reads a caption.

The ad promotes havesexmas.com, which leads to a Hims site that asks “Have you ever worried about ED?” The site notes that 40% of men aged 40 struggle with ED.

Hims is a one-stop telehealth service that also promotes solutions for hair loss. In the past, the brand has run outdoor ads featuring a cactus in various positions. As some have noted, a cactus is a weird choice since, “as a symbol, it still conveys pain, not pleasure.”

The ads appear to be working. In its most-recent quarter, Hims’ revenues grew 79% according to the company, which expects revenues to be in the range of $263 million to $265 million for 2021.

In a survey this summer, the company found that 70% of people remain anxious about a post-pandemic “normal.” Among the triggers cited included large crowds and maskless faces. The survey found that 35% of those surveyed were open to therapy.

Hence the need for some escapism this Christmas.