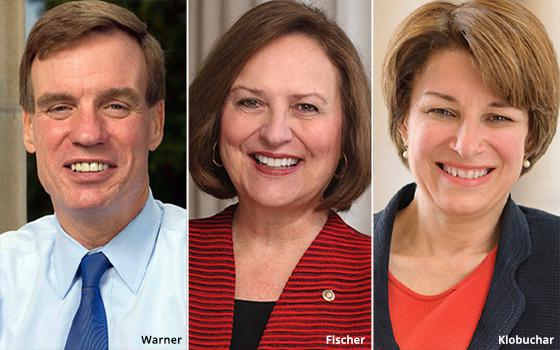 Lawmakers on Wednesday reintroduced a bipartisan “dark patterns” bill aimed at prohibiting large online platforms from tricking users into allowing their data to be collected or shared.

The bill, introduced by Senators Mark R. Warner (D-Virginia), Deb Fischer (R-Nebraska), Amy Klobuchar (D-Minnesota), and John Thune (R-South Dakota) along with Reps. Lisa Blunt Rochester (D-Delaware) and Anthony Gonzalez (R-Ohio), is similar to one unveiled in April of 2019 by Warner and Fischer.

“For years dark patterns have allowed social media companies to use deceptive tactics to convince users to hand over personal data without understanding what they are consenting to,” Warner stated Wednesday. “Consumers should be able to make their own informed choices on when to share personal information without having to navigate intentionally misleading interfaces and design features deployed by social media companies.”

Since the original bill was introduced, the states of California and Colorado have moved to prohibit companies from using “dark patterns” to prevent consumers from opting out of personalized ads.

In California, regulations approved by the attorney general in March prohibit businesses from thwarting opt-out attempts by confusing or deceptive interfaces, while a new privacy bill in Colorado -- slated to take effect in 2023 -- bans companies from using dark patterns to obtain consent to data collection.

While the concept of dark patterns remains vague, the California regulations offer some examples. For instance, businesses in that state cannot present consumers with double-negatives, such as “don't not sell my personal information.”

The DETOUR Act would also prohibit large platforms from designing child-directed sites in ways intended to encourage “compulsive usage.” One example given of that type of design is videos that play automatically.

The measure ties the definition of “child” to language in the Children's Online Protection Act, which prohibits web companies from collecting children's data without parental permission. That bill currently defines child as youngsters under the age of 13.

Another provision of the DETOUR Act would large platforms to obtain consumers' informed consent before running psychological experiments.

Questions about social platforms' ability to manipulate users date to at least 2014, when it emerged that Facebook conducted a social experiment on around 700,000 unsuspecting users.

The legislation proposed Wednesday would require large platforms to delete data obtained from experiments that were conducted without consent.