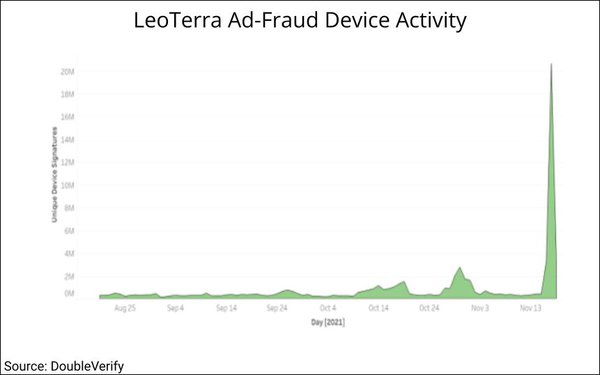 While ad fraud normally peaks in the fourth quarter due to the period’s higher ad-spend levels, fraud activity is already higher than that seen in Q4 2020, reports the digital media measurement, analytics and anti-fraud solutions company.

“For advertising to perform, it must be seen by real people,” stresses DV. “Fraud has a dramatic impact on campaign performance, misrepresenting impressions and undercutting marketers’ holiday investments.”

“The more in-demand and premium the inventory, the more likely it is to attract bad actors,” adds DV CEO Mark Zagorski.

In particular, tracking has identified current spikes in two streaming ad-fraud schemes that have attempted to spoof billions of ad impressions since they began operating in 2020.

LeoTerra (chart above) — a scheme in which fraudsters set up counterfeit server-side ad insertion (SSAI) servers to drive manufactured CTV inventory across an unlimited number of apps, IPs and devices — increased activity at the start of this holiday season, falsifying up to 20.5 million unique CTV devices per day, according to DV, which says it identified the scheme in July 2020.

Similarly, the number of spoofed CTV devices and fraudulent impressions associated with CelloTerra — a scheme identified in March 2020 in which fraudsters use mobile apps to run background ads and falsify CTV traffic — has tripled during this year’s final quarter. 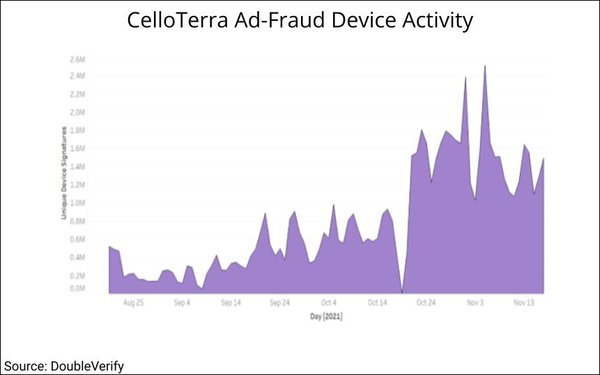