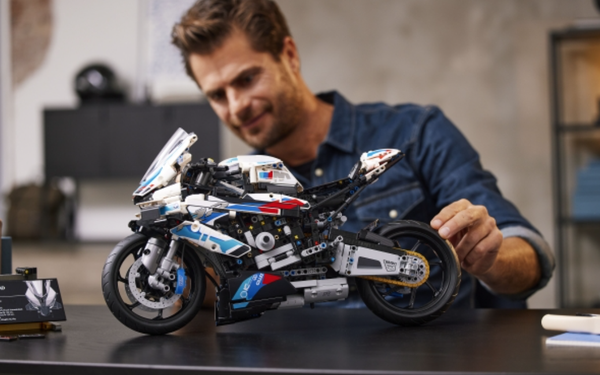 BMW is the latest brand to unveil a Lego Group model.

This intricate set, with a record number of 1,920 pieces, brings the racing technology of the 205 hp superbike to people’s living rooms.

The 1:5 scale and almost 18-inch long LEGO Technic BMW M 1000 RR offers fully functional components such as the three-speed gearbox, the upside-down fork and the rear swingarm with suspension, as well as the dashboard with three different display options and the gold-colored drive chain.

When BMW Motorrad announced the first M model on two wheels it was expected to be something special, said Ralf Rodepeter, head of marketing and product management at BMW Motorrad.

“In the same way, the Lego Technic team realized they needed to come up with something unprecedented to pay tribute to the M RR,” Rodepeter says a release. “The result is a motorcycle and a technical model that each represent the state of the art in their respective fields.”

Lego has released other BMW motorcycles and cars, including the BMW R 1200 GS Adventure and the BMW M8 GTE.

The brand works with other automakers including Stellantis, and recently unveiled a Dodge//SRT Top Fuel Dragster.