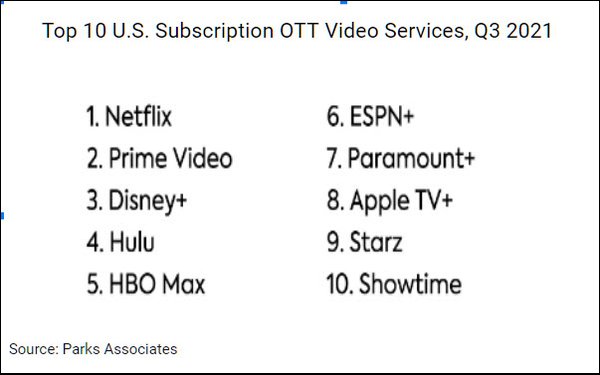 Netflix and Amazon Prime Video retained their respective No. 1 and No. 2 positions.

Hulu’s move up marks the first change in the top three since the research firm's annual SVOD ranking launched in 2015.

Parks did not release the estimated Q3 subscriber numbers behind its top 10 ranking. The research firm said the rankings are based on reported subscription numbers and estimates from its OTT Video Market Tracker using multiple consumer surveys, network traffic data and service provider information.

In November, Disney+ reported 118 million global paid subscribers for its fiscal Q4 ended Oct. 2 -- up by 44.4 million in the previous 12 months, but by just 2.1 million over the previous quarter. U.S. subscriber breakouts have been hard to come by, but based on leaked internal Disney data, The Information reported that as of July 3, Disney+ had 38 million U.S. subscribers and 110 million worldwide.

Disney reported that Hulu -- which is not available outside the U.S. -- had 43.8 million subscribers, including 4 million for Hulu + Live TV, as of fiscal Q4.

"While the Disney+ content portfolio may have allowed it to leapfrog stablemate Hulu in 2021 rankings, its position reaffirms the collective power of the Disney Bundle triumvirate: Hulu, Disney+, and ESPN+," said Paul Erickson, director of research at Parks Associates, in a statement.

Paramount+, the rebranded, expanded version of CBS All Access that just launched in March, also gained a position, for a No. 7 ranking.

"ViacomCBS's successful rebrand and content-fueled reformulation of CBS All Access into Paramount+ have allowed it to leapfrog Apple TV+ into seventh place behind ESPN+, and time will tell if the service will break into the top five,” noted Erickson.

Starz moved up one place to No.9, bumping Showtime to No. 10.

Discovery+, launched in the U.S. in January, was in eleventh position, “closely behind” Showtime, according to Parks.