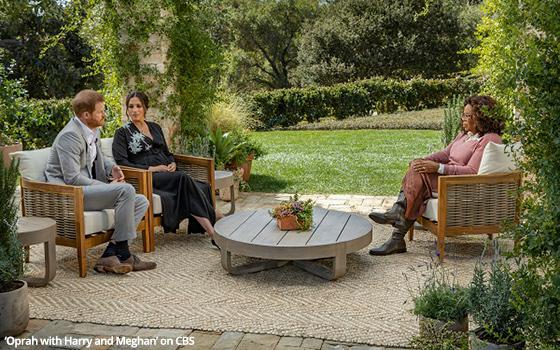 Several stories vied this year for the top spot on this annual year-in-review roundup of the top TV news stories of 2021.

The show, formally titled “Oprah With Meghan and Harry” (no last names necessary), aired on March 7 on CBS.

Its chief achievements were twofold: It generated worldwide attention and drew a total live audience in the U.S. of 17.1 million people, a viewer tally that is almost unheard of today.

One of the TV Blogs that this event generated last March congratulated Oprah Winfrey for pulling off the kind of prime-time interview special that harkened back to an era when these kinds of newsmaker interviews were highly touted and widely viewed.

However, the same cannot be said for the more-recent prime-time interview George Stephanopoulos conducted on ABC earlier this month with Alec Baldwin.

The prime-time platform gave the actor an opportunity to try to explain how he fatally shot -- presumably by accident -- cinematographer Halnya Hutchins with a prop gun on a movie set in New Mexico. Director Joel Souza was wounded.

In times past, such an interview may have riveted the nation. But this one drew a lowly audience of 4.1 million and ranked fourth in its time slot, Thursday night from 8 p.m. to 9 p.m. Eastern. The times they have a-changed.

Other stories that ran a close second to the Oprah interview this year included one about a TV show and another about a dramatic merger.

The former was the soap-opera saga of “Jeopardy!” and how it struggled until August to identify and name a replacement for long-time host Alex Trebek, who died more than a year ago in November 2020.

Unfortunately, the replacement the show finally came up with was the show’s ambitious executive producer, Mike Richards.

But days later, he lost the job when someone dug up comments he made on a podcast eight years previously in which he objectified women.

The other big story this past year was a business one -- the mega-merger of Discovery Inc. with WarnerMedia and all of its TV and movie properties.

The deal transforms Discovery from an unscripted-first content company to an owner of some of the most storied scripted content in the history of motion pictures and television.

The timing of the deal was dramatic. It was announced last May virtually on the eve of the network upfronts.

The deal has still not closed, but it has been estimated that the new entity -- Warner Bros. Discovery -- will draw an estimated $10 billion in ad revenue in its first year. The companies are hoping to close the deal next year.

Speaking of content purchases, on-line shopping colossus Amazon bought the movie and TV holdings of MGM in 2021 -- including the James Bond and “Rocky” movies. The purchase price was estimated at $8.45 billion.

In addition to its mega-merger, Discovery made news this year with the launch of its own subscription streaming service, Discovery+. ViacomCBS also launched Paramount+ as Big TV’s entry into the streaming world continued.

Peloton received a poke in the eye when Mr. Big died on one of its exercise bikes in the “Sex and the City” sequel series, and the Kardashian clan ended their long-running show on E!, “Keeping Up With the Kardashians.”

In the wake of that pop culture milestone, many are asking: If their show is now over, why are they still here?