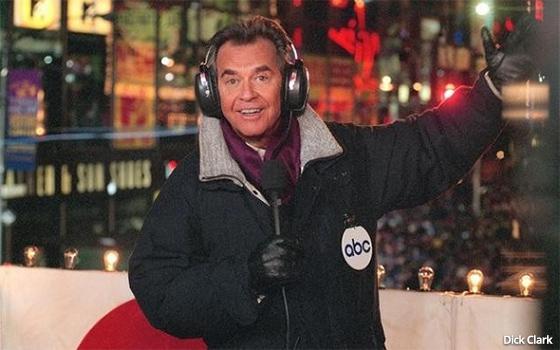 Dick Clark, TV’s king of New Year’s Eve, was a force of nature in show business for more than 50 years.

Although he died 11 years ago, he is still the headliner in the title of ABC’s annual New Year’s Eve countdown show, “Dick Clark’s New Year’s Rockin’ Eve with Ryan Seacrest.” This year’s edition is set to air, as always, tomorrow on New Year’s Eve.

Who was Dick Clark? In the entertainment business, he was pretty much everything -- “American Bandstand” host, TV producer, actor, game show host and radio impresario.

In encounters I had with him many years ago, I formed the impression that above all else, Dick Clark had perfected what you might describe as the art of amiability.

He was easygoing, well-mannered and evidently self-confident. When he spoke to me, he paid attention, and in so doing made me feel like I was his friend, if only for the few minutes I spent with him.

A photo of Dick Clark and me survives from April 1983 -- the first such photo of my career with a notable person from radio or TV.

It was taken in Las Vegas during the annual radio convention put on by the National Association of Broadcasters.

I was the newly appointed editor of a biweekly radio industry newsletter published in Bethesda, Maryland.

I doubt this newsletter had more than 800 subscribers, but the way Dick Clark treated me you would have thought I was from The New York Times or something. I was all of 23 years old.

Among other things, we talked about my hometown, Philadelphia, the city where he first hosted “American Bandstand” out of WFIL-TV (later WPVI).

I asked him where he lived when he lived in that area. He answered Drexel Hill, a suburban community I knew well.

Remembering these details is not difficult today. Dick Clark was a guy who made a great first impression. It is easy to remember him.

Some years later, still in the 1980s, I bumped into him again at, I believe, the old Hard Rock Café on West 57th Street in New York (the place closed long ago). I was then covering radio and TV for a New York-based trade mag.

It was probably another United Stations promotional get-together put on primarily for New York-based advertising clients and other business connections, but members of the press were often invited to these things.

This time, I cannot recall what Dick Clark and I talked about at this encounter, but he did something sociable that was just so like him.

At some point in our conversation, which once again was not likely long, he gestured politely toward two men talking together who were standing not far away.

Motioning graciously for me to walk with him, we approached them and he said, “Adam, I would like you to meet two friends of mine, Tommy James and Jay Black.”

Dumbfounded, I then found myself chatting with Tommy James of Tommy James and the Shondells, singers of 1960s hits such as “I Think We’re Alone Now,” “Mony Mony,” “Crimson and Clover” and others, and Jay Black of Jay and the Americans, best known for the ’60s hits “Come a Little Bit Closer” and a 1968 remake of the old Drifters song “This Magic Moment.”

I have had many adventures covering TV and radio as a journalist, but the magic moment when Dick Clark introduced me to Tommy James and Jay Black is one that looms large.

Dick Clark hosted his “Rockin’ New Year’s Eve” show on ABC from 1973 to the 2003-04 show. A year later in December 2004, he suffered a stroke that prevented him from hosting the show that month.

A year later, he gave the reins to Ryan Seacrest but continued to make limited appearances on the show up to the 2011-12 show. He died four months later in April 2012 at age 82.

In the appearances he made from 2005 to 2012, the effects of his stroke were obvious, most notably his slurred speech.

But Dick Clark, the consummate professional, soldiered on despite the challenges he faced. In those final years, the courage and perseverance he showed to the world following his stroke likely served as an inspiration to millions facing the same challenges.

It was perhaps the bravest thing I have ever seen anyone do in the TV business.