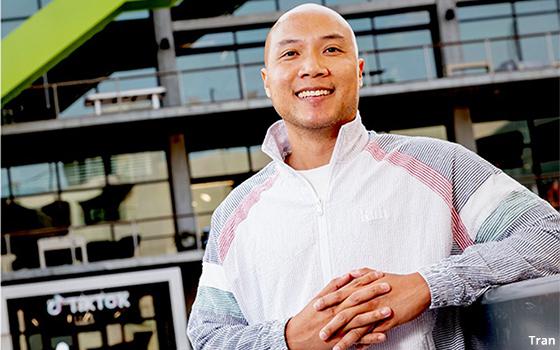 Some 14 years later, Idaho Falls resident Nathan Apodaca posted a clip of himself on TikTok that showed him skateboarding down the street as Fleetwood Mac’s 1977 hit “Dreams” played.

The video went viral, earning tens of millions of views and prompted Fleetwood Mac members Mick Fleetwood and Stevie Nicks to post TikToks of themselves grooving to the song.

That video, released in October 2020, capped off a breakthrough year for TikTok. The brand went forth with a new approach: Don’t make ads, make TikToks.

Brands like Chipotle, Amazon, Target and Mountain Dew have accepted that challenge.

The man credited for the rise of TikTok is Nick Tran, TikTok’s first head of global marketing. Tran, a veteran of Hulu and Samsung, took the role as global head of marketing at TikTok in April 2020, just six months before the “Dreams” video broke through.

Tran started his career as Unisap and originally foresaw himself following an IT track. But early on, he switched to marketing. “It struck me that I was not in the field I wanted to be in,” Tran told the podcast CMO Moves. “I wanted to be on the other side.”

After getting his MBA, at the University of California, Irvine, Tran assumed a marketing title at Taco Bell. After that, he took a role as VP of marketing at Stance Socks, where he took a Gold Lion at Cannes for his website for its Star Wars Stance collection. During his tenure there, Tran also partnered with Kia Motors for a Super Bowl ad called “Walken Closet,” featuring Christopher Walken and a custom Stance sock.

After that, Tran moved to Samsung and then Hulu, where he helped craft a Super Bowl ad starring Tom Brady that teased the idea of his retirement to announce “Hulu doesn’t just have live sports, according to the script they just gave me, Hulu also has the greatest cable channels, shows, movies and originals of all time.”

At TikTok, Tran arrived just before the platform surpassed 1 billion users in September 2021, just five years after it was founded. The app has been downloaded over 200 million times in the U.S.

TikTok’s growth has been explosive since then, going from 55 million global users in January 2018 to 689 million by July 2020, according to Reuters.  That meant a 45% jump.

To help bolster its status, TikTok launched its “It starts on TikTok” campaign, which featured real users in TikTok short films.

But in the interview, Tran said that his messaging doesn’t necessarily hinge on big statements, but little moments in which TikTok breaks through. When asked about the Fleetwood Mac moment, Tran said,  That’s definitely a moment we love, but this idea of bringing TikTok to people when they least expect it.”