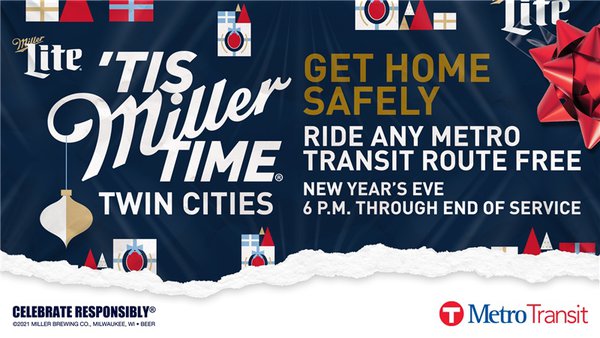 Since Miller Lite initiated the idea in its home base of Milwaukee back in 1987, Molson Coors says it has provided more than 8 million free New Year’s Eve rides on public transit across the nation.

Following Miller’s team-up with Molson Coors in 2008, the latter launched a similar program under the auspices of Coors Light in its home base of Denver.

Other markets followed in the 2010s, and this year the Miller Lite Free Rides program will also take place in Chicago and Minneapolis/St. Paul, while Coors Light Free Rides are also available in Dallas and Phoenix.

Meanwhile, Molson Coors competitor Anheuser-Busch is marking the new year with a :49 video showing a Clydesdale (its mascot) from early days to maturity, with the concluding words, “Here’s to a new year, and a future with more cheers.”