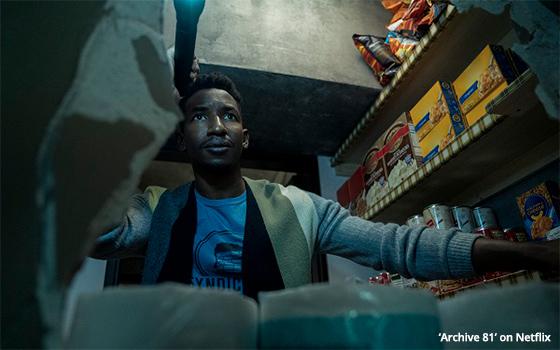 For many of us, memories of the VHS era are still vivid, but for those not yet born in the heyday of Blockbuster, they are ancient history.

That is one of the takeaways from this new thriller on Netflix, “Archive 81,” in which a young expert in film and videotape restoration (played by Mahmoudou Athie, pictured above) stumbles upon a mystery from all the way back in … wait for it … 1994!

He comes upon this mystery when he is hired by a shadowy industrialist to restore a set of VHS tapes that were badly damaged in a fire that year in New York City.

This restorer, named Dan Turner, works a regular day job practicing his profession at the Museum of the Moving Image in Astoria, Queens.

Near the outset of the premiere episode of “Archive 18,” we see him restoring an obscure movie from what looks like the 1930s. The 16mm film is caked with dirt, which he meticulously removes.

Later, we see him do much the same thing with the VHS videotapes and in the process establishes an equivalency between the decades-old movie and the VHS tapes from the 90s that are also decades old.

Indeed, they are both artifacts that have literally been dug up like archaeological finds.

The movie in its can was buried in the backyard of the long-dead person who made the film. The damaged 1994 videocassettes were found buried in the rubble of the building destroyed in that year’s catastrophic fire.

VHS tapes as archaeological artifacts? It makes a certain kind of sense. For younger people, obsolete technologies from yesteryear are not only ancient, but in the case of videocassettes, the whole system that supported them -- video stores and VCRs -- is just as obscure.

In “Archive 81,” the videocassettes at the center of the show’s main plot line were much more heavily damaged than videocassettes that might still be moldering on some people’s bookshelves.

In the show, these videotapes were shot by a young woman -- an NYU film student -- who rents an apartment in the mysterious apartment house that is said to be at least partially occupied by a secretive cult.

She comes to the building armed with a 90s camcorder (remember them?) to make a documentary about this group, which would prefer that its secretive activities remain that way. You can imagine how this plan turns out.

As he restores the damaged videocassettes, Dan begins to piece together the footage she captured and gets a sense of what happened to her.

And that’s the show -- a contemporary drama in which a mystery is found in a batch of ancient videotapes, like the discovery of a treasure map in an old pirate story.