Vegan Brand Violife: 'Change Your Cheese' -- And The Planet 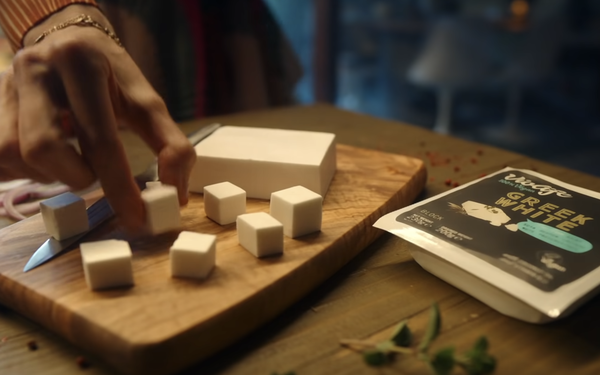 Hence the brand’s “Change Your Cheese! Change The Planet” campaign, which posits that cheese lovers can lower their climate impact without becoming vegans.

This spot from the Newton agency—shot in a bar, home and movie theater—offers up a full menu of cheeky dairy cheese alternatives.

Examples include a margarita pizza “with extra change,” an “authentic Greek change salad,” nachos “and change,” a “grilled change sandwich” and a “double changeburger.”

Violife is the #1 vegan cheese in all grocery channels, according to senior brand manager Erica Cheung.

“The Change Your Cheese campaign shows that while Violife is a vegan cheese, consumers don’t have to be vegan to enjoy it and to make a difference,” Cheung tells Marketing Daily.

“For all cheese lovers, a change to Violife—even for a day or two—is doing a little something to help change our planet.”

The campaign is based in part on a raft of scientific data from Canada, the United Kingdom and the United States calculating the environmental impact of dairy and nondairy products’ lifecycles.

According to Violife, the study concluded that the two products “have less than half the climate footprint and occupy less than one third of the land when compared to the same amount of dairy cheese.”

This video traces the roots of Violife to the 1990s in Greece.