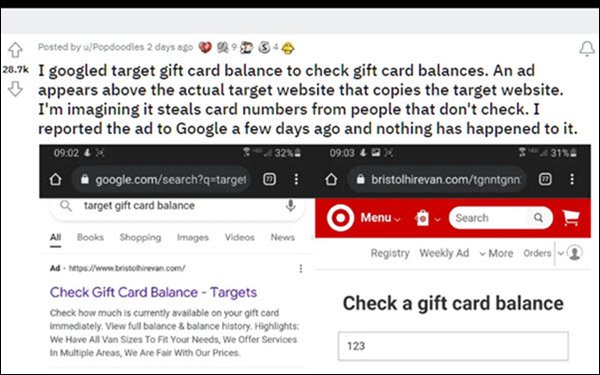 Google appears to have inadvertently approved and prominently displayed an ad for a phony Target gift-card balance checker.

A Reddit user posted (shown above) that in searching Google for “Target gift card balance” on mobile, the first result was an ad titled “Check Gift Card Balance – Target,” reports The Verge.

But those who look closely might notice that the site promoted in the ad is actually one called “bristolhirevan,” not Target — although all of the links in the bogus site lead to Target’s homepage.

Unlike Target’s real site, this one doesn’t require users to sign in to check their gift-card balances. And in addition to claiming that it will immediately check Target gift-card balances, the site inadvertently offers “all van sizes to fit your needs.”

However, the phony site’s interface “sure looks like” Target’s site, observes The Verge. “If you were really in a rush (and were somehow distracted enough to ignore the mention of vans), you just might accidentally enter your gift card’s number and security code here, resulting in it getting stolen,” notes the report.

Gift-card scams netted $148 million in 2021’s first nine months —more than the total for the entire year of 2020, according to the Federal Trade Commission. About $35 million of that involved Target gift cards — more than double any other retail brand’s gift card.

Target’s site is also one of the most-replicated by scammers, according to a 2020 report by Bleeping Computer.

As of this morning, Google hadn’t yet responded to The Verge’s request for comment on how the ad might have slipped through its review process, and whether it will be removed.