A King's Ransom? The King of Beers Offers $1M To Sweepstakes Winner 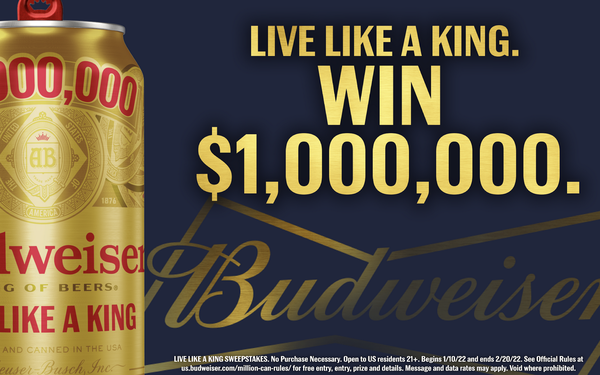 As sweepstakes prizes go, this one is huge -- and fairly rare.

Budweiser, the “King of Beers,” will award a $1 million check to one lucky consumer so that he, she or they can “Live Like a King.”

“In sweepstakes, a million-dollar prize or a combination of prizes that total a million happens usually a few times a year,” points out Craig McDaniel, founder and president of Sweepstakes Today, a website that compiles sweepstakes offers for consumers.  Another example, he says, is HGTV’s  Dream Home Giveaway, which has now been giving away houses and cars for more than a quarter century.

McDaniel says that “Live Like a King” represents the largest prize he can recall from Anheuser-Busch, although the company, in a statement to Marketing Daily, would only say that “this is one of Budweiser's largest monetary prizes in recent history.”

And, while McDaniel says to “expect to see TV commercials, which is common for very big prizes,” Budweiser said its promotional efforts would only involve in-store packaging, trade marketing materials, email marketing, a special website, and posts on social media like Twitter and Facebook.

“Live Like a King” may also be the culmination of a sweepstakes boom from beer marketers that started when COVID-19 caused a “budget shift” due to the lack of ad opportunities in live sports, according to McDaniel.

Since the start of the pandemic, McDaniel said, Anheuser-Busch has offered more sweepstakes promotions than any other Fortune 500 company, with Molson Coors also showing a significant increase.

So how does a consumer get to “Live Like a King?”

1. Find one of 10,000 specially labeled gold Budweiser cans hidden away in 24-pack cartons. Or just print a version of the label from the web.