Brands Are Terrified Of Abortion -- But Not OkCupid 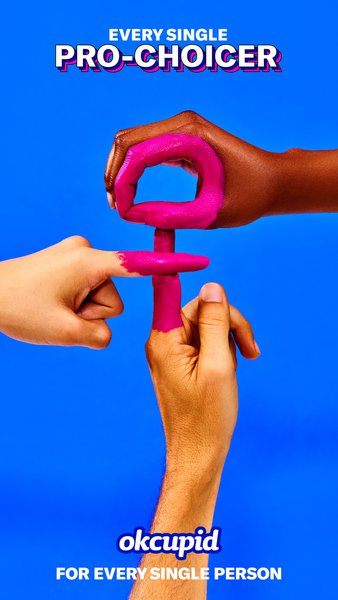 OkCupid, the online dating app that’s already happily pushing the envelope on gender bias and homophobia, is blazing ahead with new pro-choice messaging.

The new campaign starts this week in New York just as the U.S. marks the 49th anniversary of the Supreme Court’s historic Roe V. Wade ruling -- now teetering on the brink of a conservative court.

Ads will roll out to additional U.S. and global cities beginning March.

It’s all part of the brand’s ongoing mission to have users bring their entire selves to the dating process.

“We want you to bring your issues -- pun intended -- to dating,” says Melissa Hobley, chief marketing officer. “That can include unapologetically supporting abortion. We want to make it 'hot’ for people to commit to those issues to our dating app. If you’re pro-choice -- and the majority of the country is -- and can’t imagine dating someone who isn’t, then that’s a real and relevant issue.”

The new effort is a continuation of the “Every Single Person” campaign it ran last summer, with bright posters celebrating love for every person, including those who are pansexual, insomniacs, treehuggers, monogamists, vaxxers and submissives.

This new effort replaces “Every single feminist” with “every single Pro-Choicer.”

Hobley says the decision to reprise the effort came after a video of a woman tearing down the previous ads went viral. Fans of OkCupid piled on, sharing it as an example of hate. The uproar eventually amassed more than 1.5 million views.

“We were surprised at how much attention and love these homophobic rants got,” she tells Marketing Daily. “So we decided to double down on it, expanding our messages for inclusivity and reproductive rights.”

The campaign is also based on research that shows its ongoing efforts to portray gender and inclusivity differently have increased use among non-binary, pansexual and bisexual singles.

Choice has become a particularly fierce topic in Texas, with some of the most restrictive and controversial anti-abortion legislation. It’s also home to the Dallas-based Match, which owns OkCupid, Tinder and Hinge.

OkCupid’s move comes at a time when many large companies -- even those that openly endorse other divisive issues, including LGBTQ rights or Black Lives Matter -- are conspicuously silent on abortion.

And even those that donate to Planned Parenthood and have their CEOs sign “open letter” ads have made few consumer-facing statements. Exceptions include Match itself, which pledged to help pay for out-of-state abortions for its employees and Lyft, Uber, and GoDaddy.

A recent report in Wired, for example, asked 16 big-tech companies with large operations in Texas for their views on Texas’ restrictive policies.

Hobley, too, is concerned that so few brands are speaking out on abortion rights.

“We live in a society that is still not supporting women,” she says, adding that the silence is especially baffling given the number of companies trying to hire women back amid the Great Resignation.