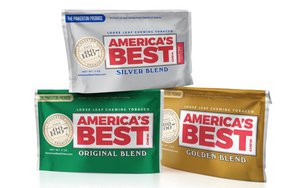 Images above: Packaging for the brand's new name, followed by the previous packaging.

Another brand bites the sensitivity dust.

It will now be called America’s Best Chew—the tagline that has long accompanied the Red Man name and logo on packaging of America’s top-selling chewing tobacco.

The stereotypical image of a Native American man wearing a feathered headdress and the Red Man name are going off-reservation to provide “greater alignment with the company’s values,” Swedish Match said last week.

“Understanding that an essential part of being America's best means being a leader, Swedish Match worked diligently over the past several months to make changes in response to our heightened awareness and our desire to be more inclusive," vice president of marketing Joe Ackerman said in a release announcing the change.

In the 1970’s, football superstar-turned-commentator Terry Bradshaw fronted the Red Man brand, as seen in this (blurry) video.

Cherokee Nation Principal Chief Chuck Hoskin, Jr. and Fawn Sharp, president of the National Congress of American Indians, were quoted in the announcement, praising the move.

The NCAI began addressing stereotypes of Native Americans in popular culture, media, and sports more than 50 years ago. Its efforts fall under the “Proud To Be” campaign.

The move by Swedish Match is the latest in a series of sports teams and consumer brands disassociating themselves from controversial Native American ties.

One team bucking the trend is the Kansas City Chiefs of the National Football League, whose home turf is Arrowhead Stadium. Last year the Chiefs retired its longtime, on-field personality, Warpaint the horse, but the team name remains the same.

At the college level, in 2020 Carthage College in Wisconsin swapped the Red Men/Lady Reds nickname for Firebirds.

North of the border, in 2019 Montreal’s McGill University dropped the Redmen name from its men’s varsity sports teams. While the school said the name came from colors worn by the team, “symbols, connotations and unofficial nicknames were propagated by the press and fans,” as reported by CBC.

On the consumer side, dairy products brand Land O’ Lakes removed the Native American woman logo from its packaging in 2020.