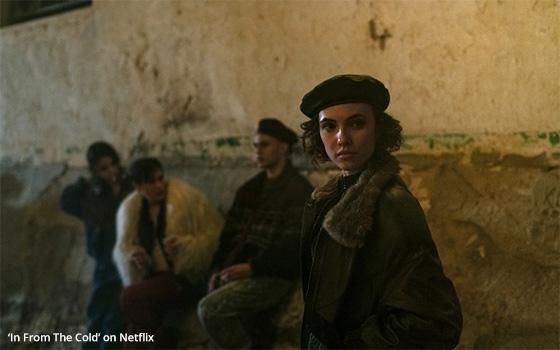 A new East vs. West spy drama on Netflix takes place not in the heyday of the Cold War, but a few years after the Soviet Union dissolved, by which time the Cold War was effectively over.

The show’s title, “In From the Cold” -- inspired no doubt by the 1963 John Le Carre novel The Spy Who Came In From the Cold -- makes the show sound like typical Cold War fare.

Not that there’s anything wrong with that. Many of TV’s Cold War dramas have been quite good.

“The Americans” on FX was one that rightfully won millions of fans and critical acclaim, even here in the TV Blog.

And just last year, the TV Blog gave thumbs-up to “Spy City” (AMC+) a stylish thriller set in 1961 Berlin. And there have certainly been others, most notably “Berlin Station” on Netflix.

In “In From the Cold,” a coterie of spies and at least one assassin are concerned with mopping up certain situations and assets that were left over from the Cold War period.

It is the assassin, a one-time Russian killer, who is the one who comes “in from the cold” in this new Netflix show.

Her story is told in two time frames -- 1994 when she was at the height of her killing career (pictured above), and the present day in which she has long been retired from the espionage trade (or so she believes).

This new Cold War show -- or post-Cold War show, if you will -- has plenty of the kind of action and suspense one expects from such shows.

In a scene set in the present day in the series’ first episode, this one-time cold warrior takes on more than a half dozen male assailants and dispatches each one of them with a calculated fury that is part John Wick and part Jason Bourne.

Besides its just-after-the-Cold War time frame, “In From the Cold” goes in other directions that are far from typical for Cold War dramas.

Without giving anything away, the premiere episode has at least two scenes in which the show veers into science-fiction territory.

These included a sudden, surprise transformation by one of the main characters that had me scratching my head and actually saying “Huh?” out loud.

This happened at the very end of Episode One, and although it defied belief and felt out of character in contrast to all that came before it, it was a very effective cliffhanger on which to end the show.

It was so surprising that pausing Netflix’s infamous on-screen “countdown” to the next episode will prove impossible to do.

“In From the Cold” starts streaming on Friday (January 28) on Netflix.