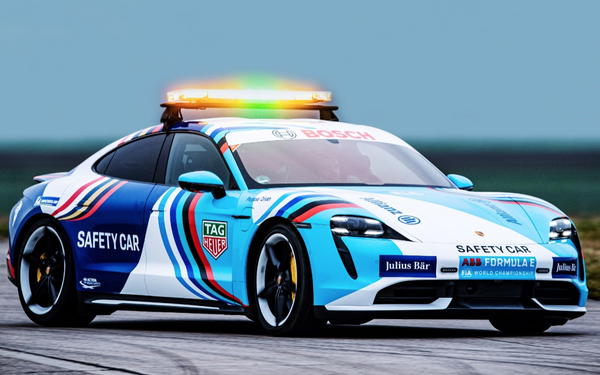 When the distinctively designed Taycan pulls out of the pit lane and onto the racetrack in the ABB FIA Formula E World Championship, it will quickly take the lead. The vehicle will celebrate its racetrack debut at the opening round of the Formula E season Jan. 28-29 in Diriyah, Saudi Arabia.

The vehicle replaces the Mini Electric Pacesetter, which had the gig last year.

Designed to be more than just the Formula E safety car, the vehicle's paintwork flies the colors of all eleven teams competing in the championship, as well as the colors of the FIA and Formula E. The number 22 acknowledges the performance of the 22 drivers who contest the series this season.

The sponsorship demonstrates the importance of Formula E to Porsche Motorsport, according to the automaker.

“We hope that this also enables us to appeal to a younger target audience who are not yet motorsport fans,” says Thomas Laudenbach, vice president Porsche Motorsport, in a release.

In other news, Formula E launched a brand campaign featuring a 3-minute video, “No Turning Back.’

Produced by London-based Uncommon, the film shows that the competition between drivers to win is part of a bigger race to fight climate change through the adoption of electric mobility solutions.

In the same vein, DHL, which re-upped its sponsorship recently as official logistics partner, is introducing the “DHL and Formula E Together Green Award.” It will recognize people and organizations who actively demonstrate meaningful change for the better of the environment

Another recently signed Formula E partner is Copper.co, a provider of institutional digital asset custody and trading solutions. The new partnership category will see Copper become the official digital asset services partner.  Copper‘s product offering is solely for institutional investors; it does not have retail clients.