MAD About Morrison: Former MAD Mag EIC And His Crew Team With The Idea Integration Co. 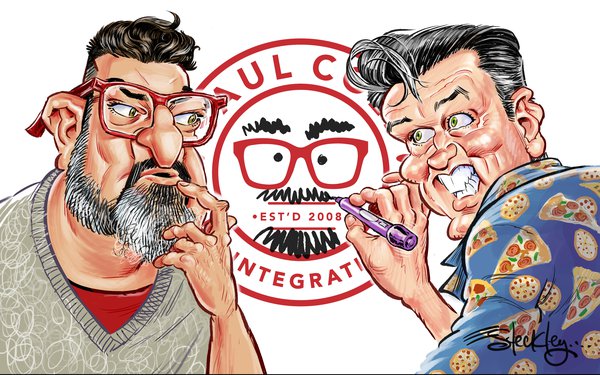 Here's a story that’s near and dear to our hearts at MAD — in fact, it’s all about MAD.

Let me clarify, it’s about the creative team at MAD magazine, led by Bill Morrison, the final editor-in-chief at the humor magazine that ceased publication of regular newsstand issues in 2019, after a nearly seven-decade run.

It still publishes archived material via subscription and an annual year-end issue.

But here’s the news: Morrison and his creative team (including Dick DeBartolo, Tom Richmond, Ian Boothby and others) are teaming up with experiential and word-of-mouth marketing firm The Integration Co. The firm was founded by experiential veteran Saul Colt in Toronto in 2008. Colt’s mission: “To shake up the advertising world using humor and satire to create memorable work for deserving brands.”

And if that’s his mission, it looks like he just teamed up with the right folks, since humor and satire is their sweet spot.

"Advertising has gotten boring,” says Colt. “The bar has been dropped so low that any brand that takes a little chance stands out.”

When MAD stopped producing new material, it marked the end of an era, added Colt. “The role of MAD was to hold up a mirror to society and say what everyone was thinking. Advertising is supposed to do the same thing, but it isn't delivering on that promise anymore.”

In Colt’s view, advertising has become “too safe -- or, the agency is more interested in winning awards than creating real, impactful advertising that speaks to the buyer. Brands are afraid of using humor for fear of offending people, but the truth is that people remember and share humor more than anything else."

What, killing off Mr. Peanut wasn’t funny enough for you, Saul? What about all those hilarious Ryan Reynolds ads for Mint Mobile and other brands?

Whatever. Colt also cites research that found 75% of a brand’s audience wants humor in advertising — and that recall is higher when humor is deployed in ads.

Morrison is kind of a big deal in the funny business. In addition to his stint as EIC at MAD magazine, he co-founded Bongo Comics with Matt Groening, and worked on "The Simpsons" and "Futurama."

Morrision said, “To be able to break new ground for brands, to help them outside of their comfort zone to a place where they can connect with their audience through satire and comedy, is something we're not only ready for, it's a charge we feel best equipped to lead as part of Saul's agency."

Morrison, Colt and the team, are already drumming up new business, so far signing up brands such as Neat, Clearco (co-founded by Michele Romanow of the TV's Dragons Den), and ServiceEcho.

agency, experiential marketing
1 comment about "MAD About Morrison: Former MAD Mag EIC And His Crew Team With The Idea Integration Co.".
Check to receive email when comments are posted.
Next story loading