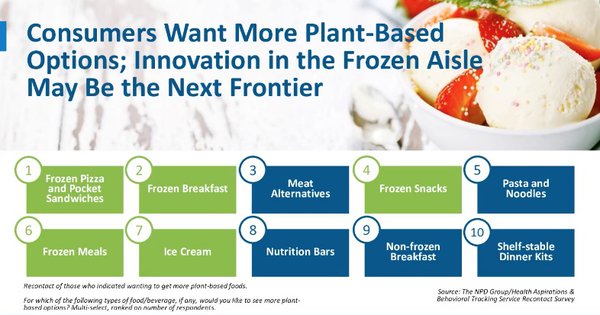 The frozen-food aisle looks to be the next frontier for innovation in plant-based dairy and meat alternatives.

That’s one of the main takeaways from a recent Food Institute webinar on all things plant-based.

“What we eat and drink is very habitual. It’s also culturally based, too,” said Seifer, who is executive director and industry analyst of food consumption.

Citing consumer data from last year, Seifer noted that plant-based burger alternatives were far and away the biggest category for at-home consumption—with a 39% share of meat-alternative eating occasions. Next in line were sausage alternatives at 12%.

In terms of milk alternatives, almond remained king at 72%, followed by oat at about 8%.

“It’s really still almond and oat that’s taking share from everything else in the plant-based milk market,” Seifer noted.

Only 19% of consumers surveyed indicated they want more plant-based foods in their diets.

While consumption of animal meats dipped slightly at the beginning of the pandemic, this wasn’t an indicator of a continued decline. Seifer noted that "consumers are still sticking with what they’ve been doing all along” -- that is, eating meat.

Still, about 15% of consumers regularly used either a meat or dairy substitute in a given week—representing just over 50 million people “so there’s a pretty substantial market out there.”

“Really, what they’re trying to say is, how can you conveniently add these items to my diet without me having to do a lot of work,” said Seifer.

The overall drivers of dairy and meat alternatives continued to be health and wellness reasons—at 56% of consumers for meat, and 51% for dairy. Environmental concerns followed at 40% and 24%, respectively.

But there are vast generational differences that weigh heavily on how alternatives should be positioned and marketed.

While environment/sustainability topped the concerns of 45% of consumers ages 18-34, it was 31% among those 65+.

The gap widened considerably with regard to concerns about animal welfare. In the 18-34 cohort it was cited by 42%, and by just 8% in the 65+ bracket.

To appeal to a broad audience, in addition to avoiding the term “vegan,” alternative brands should consider “additional labeling to address health and sustainability concerns.” In addition, “Carefully consider ingredients when innovating with new products and minimize levels of processing to preserve consumer trust.”

Since millennials and younger generations will drive the most growth in meat and dairy alternatives going forward, animal welfare and sustainability are key, Seifer noted. “Keep this in mind in messaging, branding, and the entire product lifecycle of alternatives.”

“Saturday Night Live” social video audiences were 7 times more likely than the average to shop for Beyond Meat products on Amazon, while NBC News audiences are 5.5x more likely, and CNN audiences, 5.2x.