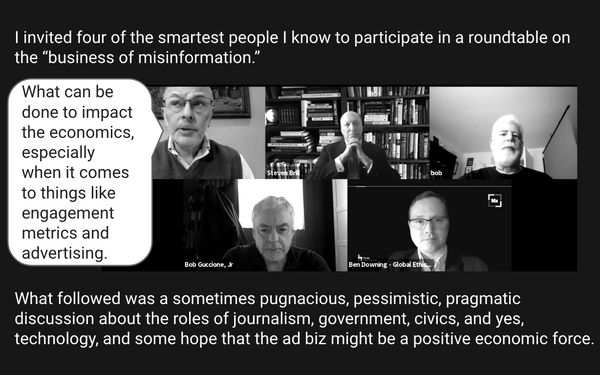 “We’re fucked,” Bob Garfield said when I asked the speakers to give me their closing thoughts at the end of a roundtable MediaPost hosted Friday on the “Business of Misinformation.”

Garfield, one of the best journalists ever to cover media, sounded genuinely rattled, as if he had turned some personal corner on it, and that we are now well past sounding alarms.

The collapse of traditional journalism models, combined with a “digital revolution” that has brought us a “Facebook-mediated world,” he said have put the economics of information firmly in the hands of “the forces of cynicism, corruption, political opportunism and — not to put too fine a point on it — evil.”

“We’ve lost to the bad guys,” he declared. “God bless us all, but I’m not, needless to say, optimistic.” 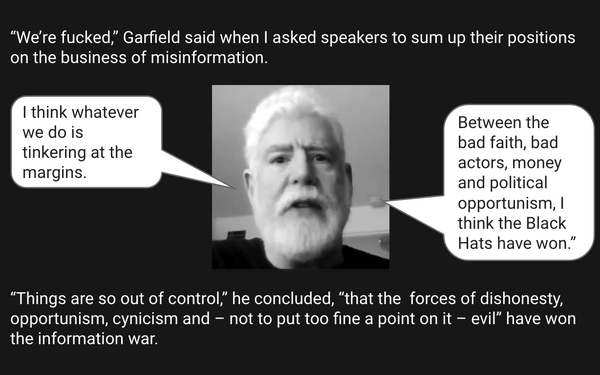 I asked the other speakers — journalists Steven Brill and Bob Guccione Jr., and ad industry ethicist Ben Downing — to respond.

“Part of this conversation has made me uncomfortable,” said Brill, taking direct aim at Guccione. “I’m a little surprised to hear someone whose roots are in Penthouse magazine talk about the government regulating content.”

He was alluding to comments Guccione made earlier in the discussion about legislative and litigative “remedies” for the most harmful cases of misinformation, and went on to make a case for “cherishing” the First Amendment.

“What that means, is not blocking things,” Brill continued. “Not even necessarily boycotting things. Not necessarily de-platforming things. And certainly not having the government regulating out content.”

He said it should be up to consumers and advertisers to decide that, and to avoid taking the same kind of “dangerous road" that “the people who are polarizing this country are now using, to cancel the content that we don’t like.” 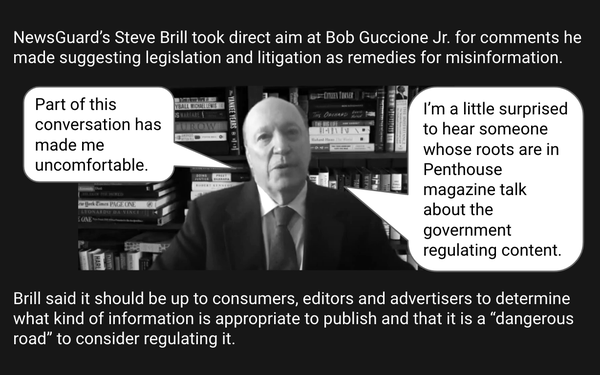 Speaking as a journalist and an editor, I also found myself in the uncomfortable position of being torn between the need to hold free speech sacrosanct, or to create new laws governing the most extreme abuses.

I’ve definitely made the case for the latter in these pages over the past several years, mainly because I believe new disruptive technologies with unbridled access to some of our most sensitive data have changed the game — as well as the rule of engagement -- and that new laws are needed to safeguard us.

That’s because I believe they operate without transparency, in ways most people aren’t even aware of, and that they impact us faster than people, organizations and current laws can possibly deal with. And I think laws can be created that do that without encroaching on our most fundamental rights of free speech.

As Guccione reminded us, there already are 17 forms of “unprotected speech” and only one -- threatening to kill someone -- doesn’t involve some form of misinformation.

If you watch a recording of the session below you can hear what the speakers had to say about regulating such things, including potentially requiring algorithms to be made more transparent, but I’m sorry to say I agreed more with Garfield’s depressing sum up, that barring some radical changes, we are just “tinkering at the margins” at this point.

The purpose of this column is to distill and compress the essence of the roundtable so that you’ll be intrigued enough to watch it and maybe even take some action of your own, because this is a problem that will require all of us — both as citizens and business people — to solve. Especially ad people, because if it isn’t eminently clear by now, advertising still is the economic engine underwriting the platforms and much of the disruptive technologies enabling the free flow of misinformation.

I’m grateful that the ad industry has woken up to this, and that innovative suppliers like Brill’s NewsGuard are creating practical ways to mediate it. But if there’s one thing you’ll take away from this discussion it is — with the exception of Brill’s unilateral position about the First Amendment — just how nuanced and torn even the world’s best journalists are on how to deal with weaponized misinformation.

“It’s so ironic that I somehow became the conservative on this panel,” Guccione — a self-described “liberal” — said after we stopped recording the discussion.

It was also ironic that Brill singled him out as somehow being anti-free speech, when he just published one of the most extensive interviews to date with anti-vaxxer activist Robert F. Kennedy Jr. in SPIN magazine.

But the irony doesn’t stop there, because even Brill said he felt Guccione had been “too generous” in giving RFK Jr. a platform for spreading his misinformation on the subject.

Guccione responded by noting that he did exercise his role as an editor to take out “about a third” of his interview with RFK Jr.

“The two-thirds that I left in was on a spectrum,” he explained, noting that some of it was a little crazy, “but he had a fact and the fact was accurate. And the rest was dead on accurate.” 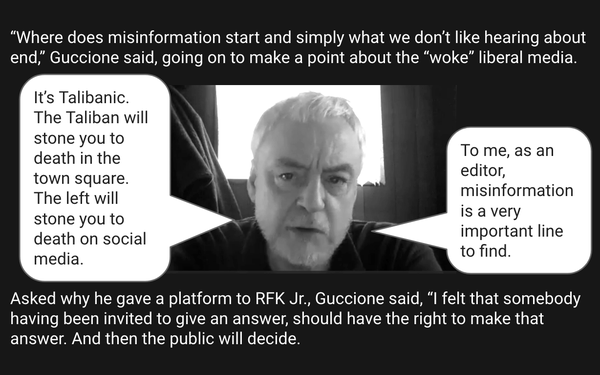 Watch the video below and you’ll see the tension for yourself, but I’d like to close this column on a hopefully more optimistic note than the Garfield quote I began it with, citing the work that NewsGuard and agencies like Havas, Interpublic, Omnicom and Publicis are taking to not just curtail funding of misinformation, but to redirect it into supporting great journalism and truthful information.

Citing findings from the most recent edition of Havas' massive, annual global "Meaningful Brands" study, Downing noted that 73% of consumers worldwide believe “brands must act now for the good of society.”

"The answer to misinformation," he said, "is having that news media available."

He then concluded by citing an economic irony on Madison Avenue: that it is easy to get funding for the next new ad tech innovation, but hard to get consistent funding for new media ventures supporting good journalism.

"I think it is a capital problem," Downing noted, suggesting that the ad industry should look at "priming the pump upfront." 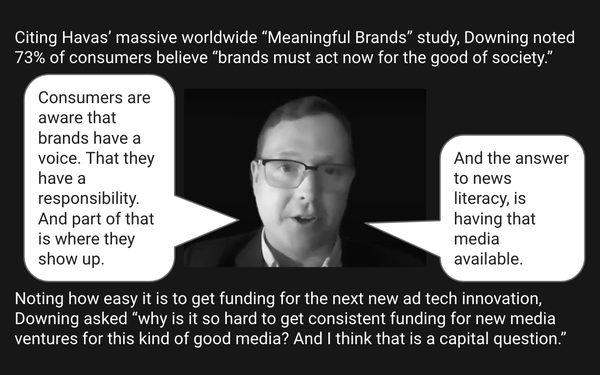