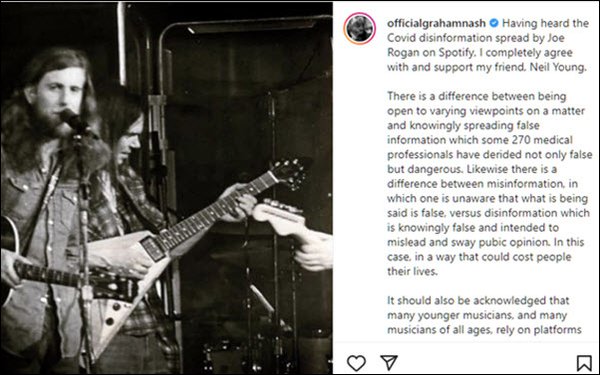 Graham Nash and India Arie have followed Neil Young’s example and pulled their music from Spotify.

Nash, a bandmate of Young’s from their days in the iconic Crosby, Stills, Nash and Young rock band, posted an Instagram message (above) saying: “Platforms like Spotify must be more responsible and accountable for the content they are obligated to moderatefor the good of the public at large.”

Nash, building on Young’s expressed concerns about public health, accused the platform of allowing its star podcaster Joe Rogan to spread intentional “disinformation” — not just “misinformation” — “in a way that could cost people their lives.”

Arie, in her own Instagram post, said her concerns about Rogan center on “his language around race.” Young, she said “opened a door that I MUST walk through.

On Sunday, Rogan released a video saying he was sorry if he “pissed off” people, and promising to try to balance his future podcasts by adding mainstream experts after he gives time to controversial guests (like Robert Malone, a physician who compared vaccination efforts to the Holocaust).

However, the shares rebounded 12% on Monday, after Citigroup raised the stock’s rating to “buy” from “neutral,” based on its expectation that Spotify’s advertising will see gains this year.

The stock’s price had already been “crushed” over the past year, falling 56% from 2021’s highs, reflecting the slowdown in some media consumption from early pandemic peaks and an overall decline in growth stocks this year, noted Travis Hoium, a Motley Fool writer who owns Spotify Tech stock.

But given Hoium’s view of the solidity of Spotify’s overall business, the price drop makes it “a great deal,” he argues. The company is taking steps to build a large advertising business in music and podcasts, so unless advertisers “leave in droves,” Spotify’s bottom line should not be hurt going forward, in his assessment.