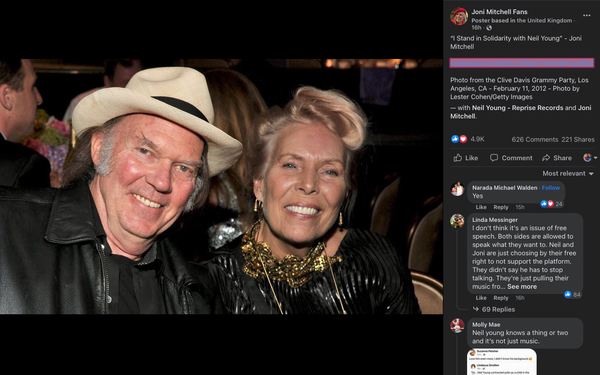 In response to the increasingly damaging controversy triggered by Neil Young removing his music content from Spotify in protest of COVID-19 vaccination misinformation on Joe Rogan’s podcast, Rogan has vowed to “balance” his shows, and Spotify is adding advisories to COVID-related content.

In a statement posted late Sunday on Spotify’s website, CEO Daniel Ek said the company is not changing its existing policies related to stemming misinformation on its platform, but plans to add an advisory to all podcast episodes that mention COVID, directing listeners to its existing COVID Information Hub with facts from legitimate health experts and organizations.

Spotify also for the first time published its “long-standing” platform rules in its online newsroom, and said it will begin testing ways to highlight the rules in its creator and publisher tools.

Malone, who among other things compared the vaccines to atrocities committed during the Holocaust, was specifically cited in an open letter published in late December, in which 270 medical professionals and scientists urged Spotify to stop Rogan’s dangerous spreading of vaccine misinformation and “immediately establish a clear and public policy to moderate misinformation on its platform.”

However, Rogan also said: “If I pissed you off, I’m sorry,” noting that he does the guest scheduling himself and “I don’t always get it right.” He said he will do his best “to balance things out” in future, by presenting guests who present alternative opinions immediately after he gives time to “controversial” ones.

He also said that he’s a “huge fan” of Young, and thanked Spotify for supporting him during this controversy, adding: “I’m very sorry that they’re taking so much heat for it.”

Last week, after Young instructed Spotify to remove his music catalog, he was followed by Joni Mitchell (who posted the photo above showing her with Young, and a statement: “I stand in solidarity with Neil Young”) and Bruce Springsteen's guitarist Nils Lofgren.

Popular inspirational podcaster Brené Brown said she would stop producing content for Spotify “until further notice,” and the Duke and Duchess of Sussex (aka Prince Harry and Meghan), expressed “concern” about COVID misinformation on Spotify, through their production company Archewell Productions.

Perhaps more important, Spotify has reportedly been deluged by customer complaints and subscription cancellations since it sided with Rogan after Young forced the platform to choose between his music and Rogan. Spotify refused to remove any existing Rogan content and said it already had policies to control misinformation.

By Thursday, customers calling Spotify’s live-chat customer service were instead greeted by an automated message referring them to other options, like its “community help” online section. “We're currently getting a lot of contacts so may be slow to respond," the message read, according to Newsweek.

Tags including #DeleteSpotify, #DropSpotify, #CancelSpotify, #SpotifyDeleted were proliferating on social media, along with posts from people providing directions on how to cancel their subscriptions online, without live assistance.

One post summed up the reason for the delete-themed tags this way: "@Spotify would rather make a buck endorsing a dangerous ideology (in which people can literally die) than to remove misinformation from their platform.”

A post on @OccupyDemocrats noted that the World Health Organization had thanked Young for standing up against COVID misinformation.

In his post, Spotify’s Ek stressed the platform’s early, ongoing efforts to address the pandemic, including campaigns to raise awareness and developing the COVID information hub.

“I trust our policies, the research and expertise that inform their development, and our aspiration to apply them in a way that allows for broad debate and discussion, within the lines,” Ek wrote. “We take this seriously and will continue to partner with experts and invest heavily in our platform functionality and product capabilities for the benefit of creators and listeners alike. That doesn’t mean that we always get it right, but we are committed to learning, growing and evolving.”

The controversy, along with the unstable overall market, pushed Spotify’s shares down to a 52-week low of $164.41 on Friday before they rebounded to $172.98, according to CNBC. The company’s shares are down about 26% year-to-date.