Look! Up In The Cloud! It's Super App! 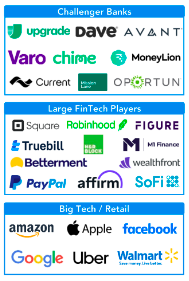 Given the media industry's love for hyperbole, I suppose it was only a matter of time, but now we don't just have apps, we have "super apps."

No, they're not able to leap tall buildings in a single bound, unless maybe they're utilizing some kind of AR filter, but they supposedly can do pretty much anything else.

The first time I heard about them was a half dozen years ago, when I met with Bessie Lee, then CEO of GroupM China, and she explained to me the way people were using WeChat in China -- sort of like search, social, ecommerce and banking all rolled up into one.

This week I received a report detailing how the "race is on" to create these kinds of apps in the U.S. and the rest of the world.

The 130-page report, "The Race To The Super App," comes from Financial Technology Partners (FTP), which specializes in analyzing the so-called fintech industry, so its focus comes from that bias. Nonetheless, it has important implications for advertisers, agencies, media and others likely to read Mobile Insider -- because whoever get there first is likely to disrupt, if not dominate the way consumers use media to interact with brands.

The report makes the case that there already are two Super App role models, both in China: WeChat Pay and Alibaba's AliPay. Basically, they're souped-up digital wallets connected to end-to-end ecommerce platforms.

While the report doesn't yet declare a winner to the Super App race in the U.S., or the rest of the Western world, it outlines the most likely contenders, grouping them into three buckets:

"The Super App race has been heating up in the U.S. in recent years," the report asserts, "with legacy financial institutions, fast-growing challenger banks, and consumer FinTech, and potentially tech giants such as Apple and Google looking to become the first true financial Super App in the fragmented U.S. market."

While the report is chock-full of case studies delineating the traction of various players, it doesn't actually place any bets.

But if I were to wager, I'd put my money on Apple and Google, because they have already scaled something I believe to be a super power: trust. And they keep doubling down on it.