R3 Worldwide is out with its analysis of 2021 new business activity, finding that reviews bounced back globally, increasing by 53.5% over the previous year. In 2020, when the pandemic was raging, marketers were focused on other priorities like preventing their companies from falling off a cliff.

Last year some big reviews were back on the table, including Coca-Cola, Unilever, and Mercedes-Benz.

Total revenue from reviews increased 9%, reflecting what R3 describes as more "snack-sized" opportunities.   “Increasingly, the AOR is dying and the smartest agencies are pivoting their services and their talent mix to reflect this,” said Greg Paull, co-founder and principal at R3. “For every consolidation to a holding company, there are another four or five other clients looking to build a more flexible roster and bring new agencies into the tent.”

R3 reports that WPP was tops among the big holding groups, with more than 2,000 wins globally, equating to more than $1.5 billion in annualized new business revenue. Winning a big piece of the Coca-Cola business helped the holding company take the top spot.

Omnicom Group was third-ranked, with 859 wins and over $503 million in new business revenue, while Interpublic was fourth and Havas Group rounded out the top five. IPG racked up 632 wins and $314 million in ne- business-related revenue. The numbers for Havas were 647 and $261 million, respectively. 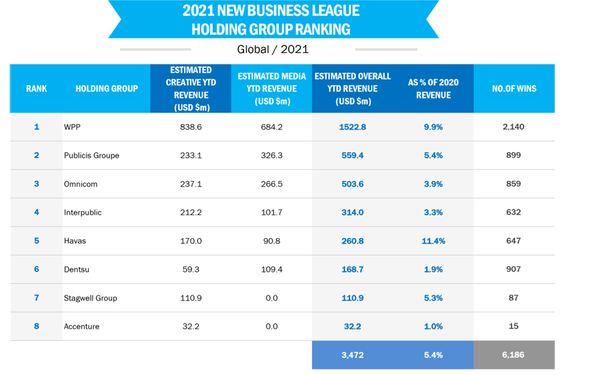