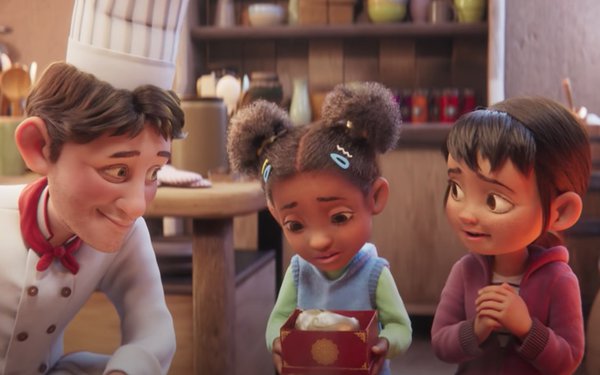 Image above from Chick-fil-A’s "The Whoopsery."

Video ads for eight QSR chains—topped by Chick-fil-A—made up the list of the 10 most-viewed QSR spots on YouTube in 2021, according to digital ad-tech provider AcuityAds.

With 71.3 million views, Chick-fil-A’s two-minute effort titled “The Whoopsery” was a Willy Wonka-style, animated fairy tale that launched in November in the walkup to Christmas.

While helping adorn a Christmas tree, a young girl accidentally breaks an ornament that had belonged to her grandmother. She and a grieving friend are then transported to a magical place called The Whoopsery, where a wizard-like chef helps to restore the trinket.

The only mention of Chick-fil-A is its name superimposed at the very end of the spot.

“Branding is about building positive memories and associations with the brand,” AcuityAds chief strategy officer Seraj Bharwani tells Marketing Daily. “I can't think of a better way to accomplish this goal than to produce and deliver a memorable and heartwarming story creating positive affiliation with the Chick-fil-A brand.

“Over the past decade, consumer attention and engagement with brand-created stories has consistently been better than the standard 30-second commercials touting weekly promotions,” Bharwani adds.

Close behind Chick-fil-A was this 15-second spot (68.6 million views) promoting Burger King’s “$1 Your Way” menu promotion. Participating restaurants offered items like a bacon cheeseburger or chicken sandwich for one dollar each as a way to help people cope with financial restrictions during the pandemic.

Featuring the Mafia-inspired character Tony Bolognavich portrayed by actor Brad Garrett, the first-ever Super Bowl spot from Jimmy John’s garnered 66.9 million views and the #3 spot. Having earned the title “King of Cold Cuts” and made a fortune doing so, Bolognavich laments the entry of Jimmy John’s into his turf with the chain’s “high-quality, reasonably priced sandwiches.”

The “chicken wars” redux was the subject of the #4 YouTube QSR ad from Kentucky Fried Chicken—at 35.6 million views. The voice of KFC founder Colonel Sanders disses competing chains known more for making burgers than chicken sandwiches by noting “It’s none of their business.”

Subway scored the #5 spot at 32.2 million views with a fast-talking explainer about myriad new menu offerings—so many that “We Don’t Have Time For Tom.” That’s a reference to football legend Tom Brady, who appears chagrined at the end of the commercial.

KFC was one of two QSRs—the other being Burger King—to land two spots in the top 10, the second being this promo for…yes, its chicken sandwiches. The 15-second video scored 28.8 million views and landed at #6.

McDonald’s followed at #7 (23.1 million) with a promo for its crispy chicken sandwich. “We could let this crispy, juice, tender chicken speak for itself. But then who would speak for the crinkle-cut pickle?” asks the voiceover.

Dunkin’ encouraged viewers to “Toast your way, all day” -- as in, bacon-topped or regular avocado toast and a grilled cheese melt. This 15-second commercial landed 21.3 million views and spot #9.

Rounding out the top 10—with 20.7 million views—was this 15-second El Pollo Loco spot that declared “No more sad lunches” like leftover pasta. It marked the introduction of the chain’s four-variety Loco Lunch Box containing entrées, sides and chips.