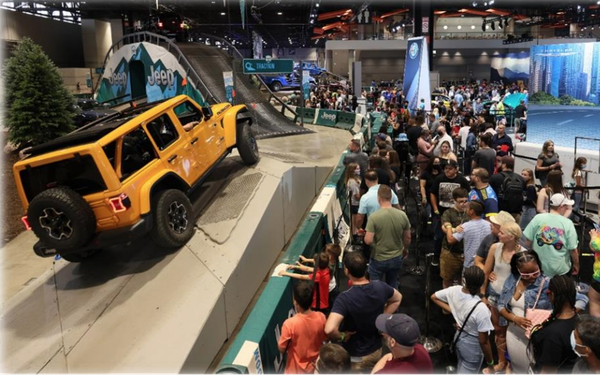 After last year’s Chicago Auto Show was pushed back to July due to a rise in COVID-19 cases early last year, the event is back to its normal chilly February time frame.

While journalists like to complain about having to go to Chicago in February -- and previously, the Detroit auto show in January for media days -- the shows are really for consumers. And it’s the ideal time to give stir-crazy, shut-in consumers something to do.

Indeed, the show boasts some impressive metrics with more than 90% awareness rate among the local population. The average visit to the July show last year was a record high six hours, an increase from four hours during the last show in 2020.

And these aren’t just window shoppers — 78% of attendees plan to purchase a vehicle within a year, an increase from 70% in 2020, and above the average national auto show attendee intention of 74%.

Last year, 37% of attendees participated in a test track or test drive ride. Those offerings are back and expanded.

The indoor track, which will allow consumers to evaluate EVs side by side, will feature models including the Kia EV6 and the BMW i4 M50, the all-electric, high-performance version of BMW’s technological flagship iX.

Trained product specialists will be on hand throughout the entire show to highlight various aspects of the electric vehicles including technology, range and charging capabilities, says Chicago Auto Show Chairman Bill Haggerty.

"Given the rapidly growing electric vehicle segment, the Chicago Auto Show serves as an ideal venue for attendees to learn about and experience brand-new EVs and explore whether or not owning one is right for them," Haggerty says in a release.

The Powering Chicago indoor EV track is one of six indoor test tracks at the Chicago Auto Show, which is the largest number of test tracks ever offered inside the show.

Toyota is debuting an all-new indoor test track — the Toyota Drive Center — to showcase the 2022 Tundra pickup truck. Visitors to the track will ride with professional drivers who will demonstrate the towing technology found on the new Tundra.

Toyota will display an array of new vehicles, including the all-new 2023 Sequoia, 2022 Tundra Capstone and the all-electric 2023 bZ4X. This year, guests will get a closer look at 59 vehicles in a 44,980 square-foot display, featuring new and upgraded vehicle features.

The automaker’s luxury division, Lexus, is also showing off its technology via the all-new 2022 Lexus  LX 600,  NX and IS 500 SEMA Build. The Lexus booth will feature a Lexus Interface simulator, allowing guests to engage with the features of the all-new intuitive connected multimedia system.

Other new vehicles expected to debut include a Nissan Frontier concept vehicle and a Ford Bronco Everglade edition.

Buzzworthy EV trucks and cars on display include the 2023 Chevrolet Silverado, the 2023 Ford F-150 Lightning and the Subaru Solterra SUV.

The 2022 show opens to the public Feb. 12 after a two-day media preview and black tie charity benefit. It will run through Feb. 21.