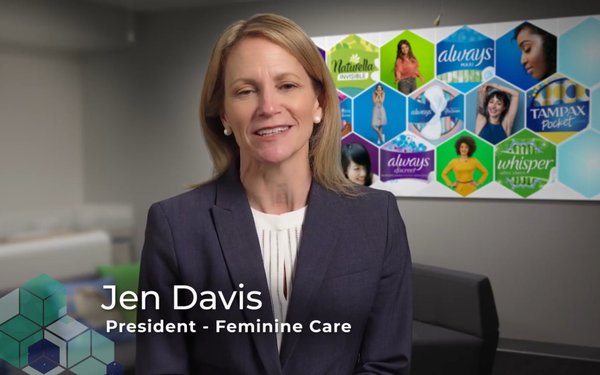 If you build it (a better product), they will come.

This twist on the “Field of Dreams” mantra is part of Procter to & Gamble President/CEO Jon Moeller’s continuing refrain: that superior product performance works hand in hand with superior brand communications to increase market share.

An example: over the past two years, Always has benefited greatly from the launch of FlexFoam technology, which has accounted for over 80% of U.S. growth in the pads category and five points of Always’ own share growth. To back that up, she played a :30 spot for Always FlexFoam touting the brand’s “strongest claim ever -- up to zero leaks and zero feel.”

Another P&G menstrual care product, Tampax, has grown its share of the tampon market over six points since launching an “educational campaign grounded in humor” starring “tampon guru” Amy Schumer in July, 2020, Davis said. The campaign – which she illustrated with this :30 spot -- has used “TikTok, YouTube and even gaming,” she noted, resulting in a reinvigoration of the overall tampon segment “following five years of stagnant market growth.” And Tampax, she said, has led the overall segment to more than 10% growth over the past two years.

Revealing results of one particular campaign, Davis said that a summertime push for an Always initiative to keep girls playing sports during puberty had resulted in 2 million impressions during its first 72 hours and a 10% increase in incremental sales at major U.S. retailers.

The #KeepHerPlaying campaign, which pledged to donate 5 cents to the YMCA per pack of Always period pads or Tampax tampons sold during a four-month period, featured more than 85 influencers, plus a :30 spot that Davis showcased for the CAGNY.

Davis said  Always has now donated more than $800,000 to the YMCA and the Women’s Sports Foundation, since launching its #KeepHerPlaying initiative in early 2021.

In addition to menstrual care, P&G’s feminine care unit entered the incontinence market eight years ago with the launch of Always Discreet.

At that time, Davis explained, while one in three women over the age of 18 experience bladder leaks, only one in nine would use an incontinence product. That figure has now been halved, she said, with one in six now on board.

“Over the past three years,” she continued, “we have grown sales at three times the rate of the global incontinence category and hold the number two spot in North America.”

In Always Discreet’s latest campaign, “Question Your Protection, of which Davis played this :30 spot, the brand goes after entrenched users of such brands as,Poise, Kimberly-Clark’s category leader, “who don’t love their experience but are unsure about switching.”

The future for Discreet looks bright in any case. As Davis noted, “current household penetration [for the category] is low, and the aging global population and the rise of obesity will only increase the incidents of bladder leaks.”

Finally, Davis extolled the virtues of “naturals,” which she termed “one of the fastest growing segments in feminine care, up more than 40% in the U.S. in the past year. Procter & Gamble is the segment leader …contributing more than five times our fair share of global category growth behind a portfolio of offerings from Always, Tampax and This is L.”

As a superiority success story, she cited “a new paper-based package on our super-premium Always cotton protection pads in select stores in Germany.” It’s made from renewable resources and can be recycled. Despite higher pricing, she said, sales increased over 50%. The product recently won honors from the World Packaging Organisation at its annual awards ceremony.

It’s “just one example of how we are delivering a superior proposition to those unwilling to compromise performance while seeking good-for-me and good-for-the-planet options,” Davis stated. “We believe if we do this well, brands like Always and Tampax will continue to be a force for growth and a force for good.”

Moeller noted that when P&G introduced its "superiority" strategy in fiscal 2016, the company judged about 30% of its portfolio to be superior. That number is now at 75%, he said