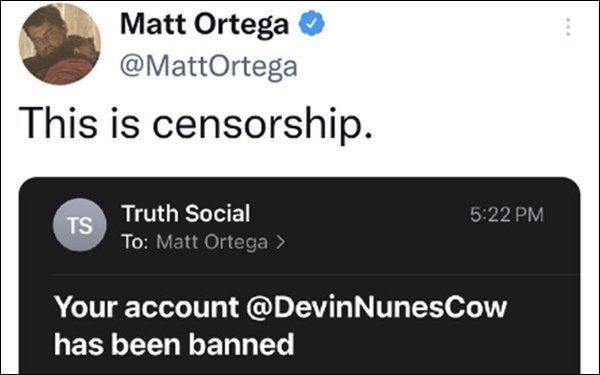 After an initial surge at launch nearly two weeks ago, Donald Trump's much-hyped Truth Social platform -- intended to be his alternative to Twitter and Facebook, where he's still banned -- has fizzled.

As of Wednesday morning, it had fewer than 80,000 followers and had fallen to No. 57 in the App Store, behind Tinder and Planet Fitness Workouts, according to Axos Pro Rata.

"Trump has posted only once-- about two weeks ago... Instead, he's given his comment to radio and TV hosts," notes author Dan Primack, noting that had he prioritized his comments to the social channel, media outlets would have mentioned the app.

Not great new for the Digital World Acquisition SPAC (special purpose acquisition company) that invested over $1 billion in the launch and wants to take it public at a value of more than $3.5 billion.

The SPAC stock gained more than 350% on October 21 on the news that it would take the Trump venture public, and its shares had gained nearly 90% year to date. As of mid-day Wednesday, it was up just 2% YTD, reported Seeking Alpha.

The app, which was developed by TMTG (Trump Media & Technology Group) -- a publicly traded company run by former Republican Congressman Devin Nunes -- claims to offer a "big tent" for all kinds of opinions, but offers a "dark mode," and has already ejected a Twitter account created to parody Nunes (ban message shown above).

Truth Social was the most-downloaded app in the App Store in the first 48 hours or so after its launch.