There's A Dark Mode For That

A former President of the United States officially launched his own social media platform this morning, debuting "Truth Social" on Apple's App Store this morning.

The app's description, which makes no mention of the former president's name, describes itself as a "social media platform that is free from political discrimination."

It also touts a "dark mode" feature, but it isn't clear whether that is intended to be ironic or literal.

Equally ironically, it says users are able to post "a truth" or a "re-truth," but does not explicitly use any phrases such as "alternative facts."

The app, which was developed by TMTG (Trump Media & Technology Group), a publicly traded company run by former Republican Congressman Devin Nunes, uses copy evocative of a Trump Rally, or maybe even a promotion for his Mar-A-Lago country club.

"What exactly is Truth Social's 'Big Tent' approach," the App Store listing reads, adding: "Think of a giant outdoor event tent at your best friends wedding. Who's there? The combination of multiple families from all over the United States, and the world. Uncle Jim from Atlanta is a proud libertarian. Aunt Kellie from Texas is a staunch conservative. Your cousin John from California is a diehard liberal. And guess what? They're all together to have an amazing time and share their different viewpoints on the world."

If that sounds like fun to you, you can download it at the App Store, but not from Google's Android Play store -- at least not yet. 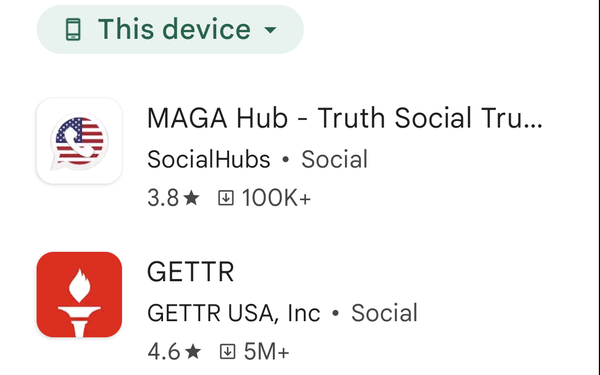