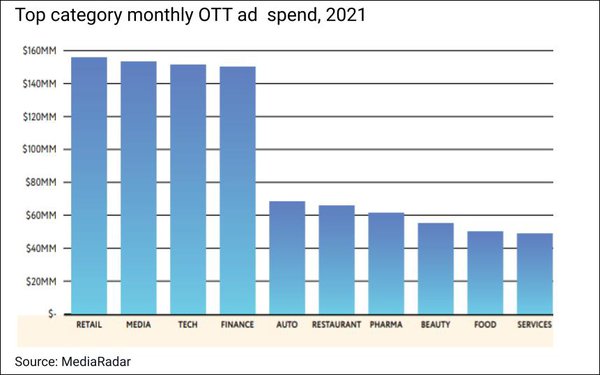 Over-the-top advertising reached about $1.3 billion last year — up from 2020’s pandemic-depressed $890 million, according to MediaRadar’s OTT Ad Insights report for 2021. A not-insignificant sum, but still only about 3% of total digital ad spend per month.

The report, which focuses on the five top ad-supported brands —Discovery+, HBO Max, Hulu, Paramount+ and Peacock — offers a capsule view of the market, several key indicators and the streamers’ individual strategies.

First, some quick background. MediaRadar defines OTT as video and streaming media provided via the internet, with data covering both standalone streaming platforms and “TV anywhere” viewing from top linear networks. Standalone streaming services are sampled from ad-supported streaming packages, across profiles in the 18-to-34 and 35-to-49 TV demos.

A monthly ad analysis shows 2021 spending peaking in October, to reach 4% of digital spend, before dipping back to 3%. Despite the month-over-month dip in December, overall Q4 OTT spend was up 22% versus Q3. Q3 spend was down slightly from Q2, which was up 14% versus Q1. 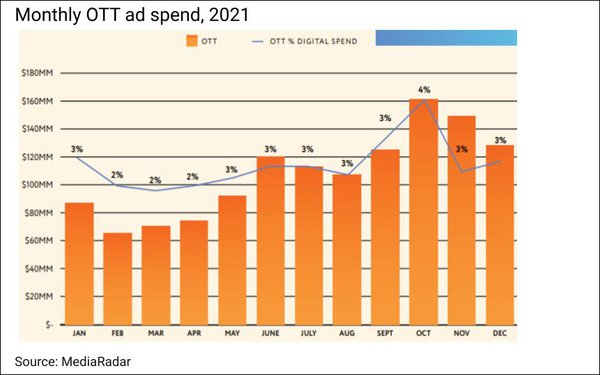 As we would expect, performance varied by streamer. Looking at December versus November, for instance, Discovery+ saw advertising leap by 90%, HBO Max by 17%, Peacock by 7% and Paramount+ by 4%. Hulu, in contrast, saw spend drop 48% month over month.

A Handful of Categories Heavily Dominate

In 2021, MediaRadar counted 5,530 total advertisers running across the five ad-supported platforms. These advertisers served nearly 500,000 ads during the second half alone.

Fully 60% to 72% of all ads placed on the five streamers fell in those top-five categories — demonstrating high dependence on, and strong competition for, a fairly limited pool of advertisers.

And today, we learned that a Disney+ ad-supported video-on-demand (AVOD) version is on the way, which is sure to up the competition exponentially.

Though retail edged out media in revenue last year, media advertising — ads for movies, video games, TV and streaming programs and services — continued to command the largest shares across the five platforms. Media’s share ranged from 19% for HBO Max to 33% for Peacock, with Discovery+ (22%), Hulu (24%) and Paramount+ (26%) in between.

But the data confirm that category strengths do vary somewhat across the AVOD platforms.

Discovery+ — which says its biggest challenge is explaining to consumers that the streamer offers far more than just the Discovery Channel (including the HGTV, Food, TLC and ID channels) — attracts the most retail advertising. In fact, 22% of its advertising revenue comes from retail. That’s double any of the other four platforms.

HBO Max’s positioning relies on its original content -- including a deep library of retro content -- and its Warner Bros. blockbusters, which last year debuted on the service on the same day as in theaters. Category-wise, it leads in financial and insurance brands, which represent 19% of its advertising revenue — two to three times that of any of the other four leading AVODs.

Paramount+ and Hulu dominate pharma advertising. “This could be due to older audiences that watch CBS content and are a good fit for pharma advertisements,” notes the report. It could also be that the fledgling Paramount+ is benefiting from the long-term relationships developed by the ViacomCBS Digital ad sales team.

Hulu leverages its place within the Disney+ bundle (along with ESPN+), as well as positioning itself as both a streaming and live-TV option.

Peacock is positioned as a one-stop shop for originals, blockbusters, classics and streaming channels. Interestingly, no word in the report on Peacock’s categories of strength, if any.

House ads for streamers’ own programming or that of sibling properties within their parent companies represent 16% of total ad spots run across the platforms, and most OTT channels allocate about 12% to 15% of total spots to their own programming.

Peacock is the exception, dedicating nearly 30% of total inventory to market NBCUniversal’s own properties, underlining NBCU’s focus on building cross-platform audiences for its programming.

House advertising is highest immediately after a new channel launches, but has been in decline as OTT channels get better at selling their inventory, notes MediaRadar.

Paramount+’s ad load is nearly twice that of its nearest competitor, both per hour and per show. ViacomCBS may be “giving more to advertisers to entice them to the platform, or possibly bundling more actively,” notes the report. “It’s also possible that they’re trying to improve sales by packing in ads.”

Peacock and HBO Max have the lightest ad loads. This may be a way to win over subscribers with a better viewing experience, but also to win advertisers. “Fewer ads may be a signal to advertisers that they’ll have a less cluttered space to get their message out,” says MediaRadar.

Hulu has been lifting frequency, from nine to 10 ads per hour in January, to 12 ads per hour currently. The company continues to post the highest number of total advertisers and ad dollars, and increasing inventory is likely helping it realize revenue goals.

Discovery+ is in the mid-range of ad loads. This could be a result of Spot-Lite Ads that reward binge viewers with reduced ads, and Lime-Light Ads that make the sponsor the centerpiece of a limited-commercial environment.

In OTT advertising, ads longer than 30 seconds are considered intrusive, and 15- and 30-second ads are the norm.

But each platform has its own method for allotting ads of varying length, and over time, they are learning what keeps viewers engaged and advertisers able to build their brands — “a challenging balance to strike,” notes the report.

Nearlyall ads running on Peacock are 15 or 30 seconds, with roughly one third of ads the former and two-thirds the latter.

Hulu follows a similar pattern, with about a third of ads at 15 seconds and half at 30 seconds. The remainder are between five and 10 seconds.

Discovery+ has a nearly perfect split between 15- and 30-second ads.

Nearly half of HBO Max’s ads are 15 seconds, a third are 30 seconds, and the rest are five to 10 seconds.

Slightly over half of Paramount+’s ads are 30 seconds, a third are 15 seconds, and the rest are five to 10 seconds.