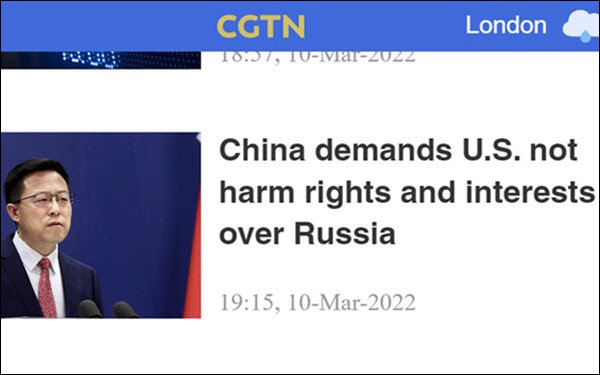 Meta's Facebook is allowing China to help Russia spread disinformation about its invasion of Ukraine with pro-Russia, anti-NATO ads that reach many regions of the world.

Meta began blocking state-controlled outlets from buying ads in the U.S. in 2020, and last week said it would start banning ads from Russian state media on its platforms. But neither of those policies stops Russian-sympathizing countries like China from buying ads.

In response to the Chinese ads report, Meta pointed to remarks made last week by Nick Clegg, its president of global affairs, who said, “This is a highly exceptional and tragic state of affairs, which is why not only ourselves but many others in the tech sector are taking these pretty exceptional measures at this time." Clegg stressed that Meta and other tech companies are attempting to balance the need to stop misinformation with the importance of keeping information flowing to the world.

CGTN (website shot shown above) is controlled by the Chinese Communist Party and registered as a foreign agent in the U.S. in 2019. The media outlet claims to reach 1.2 million people, including 30 million U.S. households.

In public statements, Chinese President Xi Jinping has said that the territorial integrity of all countries must be respected, supported peace talks between Russia and Ukraine, and said his country would send humanitarian aid to Ukraine. However, the ads from CGTN include messaging that supports Russia amid news clips from the outlet.

Meta (and Google) last week also blocked Russian state-controlled outlets RT and Sputnik in Russia, Ukraine and the EU. Russia subsequently announced it would block Facebook in the country.

Samidh Chakrabarti, a former head of civic integrity for Facebook, asserted in a tweet that Meta was “likely left with no choice” about cutting off Russian state outlets because “they needed to undo the damage that years of recommending these entities have done (and the scores of permanent Page followers they created)."