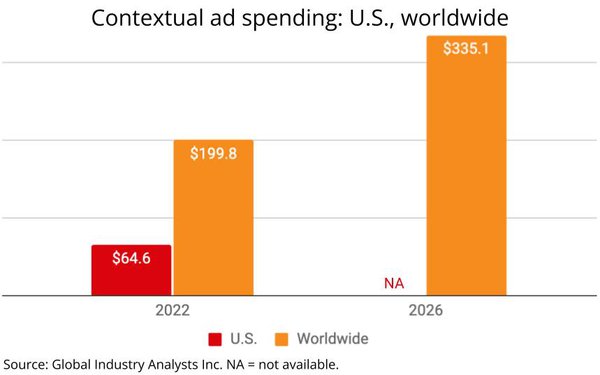 The pandemic has impacted advertising revenue in the past two years, but a new market study published by Global Industry Analysts Inc. forecasts an uptick for contextual advertising.

It estimates the global contextual ad market will hit nearly $200 billion this year, and an estimated $355 billion by 2026, growing at a CAGR of 13.3% over that period.

Contextual advertising refers to ads on a site. The ads are usually displayed via automated systems and ad content is related to web page content viewed by the user. Ad selection is based on keyword targeting and appears in the form of pop-ups.

The study found almost 41% of this market segment is location-based advertising.

Activity-based advertising, another large segments analyzed in the report, is projected to hit $195 billion by 2026. Activity-based ads deliver marketing messages in real time. They can be logos, graphics, texts and pictures. For example, a user visits a store, then gets an email message.

China, the world’s second largest economy, is forecast to reach an estimated market size of $45.4 billion in 2026.

Within Europe, Germany is forecast to grow at approximately 12.4% CAGR, while the rest of Europe will reach $52.1 billion by 2026.

Key factors responsible for boosting growth include increased adoption of artificial intelligence and big data analytics in digital marketing; increased number and use of smartphones; as well as global personalized marketing strategies.

Mobile devices are expected to account for the biggest size of the market.

Publishers are benefiting, too. They are moving from third-party audience targeting to building context-based ad tools and integrating them with first-party data segments.