No Escape From New York In 'DMZ' On HBO Max 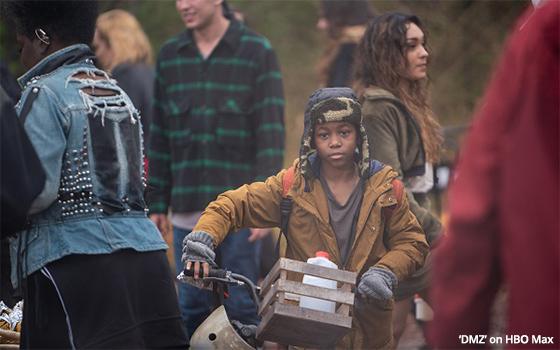 A new apocalypse drama coming to HBO Max this week begins with thousands of terrified New Yorkers attempting to flee Manhattan as fighter jets fly just above the skyline firing missiles into the streets around them.

This is another example of the unfortunate and probably coincidental timing of a new drama on TV.

With images on the news all day and night of the residents of Ukrainian cities experiencing much the same thing, this opening scene of the show -- titled “DMZ” -- may resonate with many in all the wrong ways.

Who among us here in New York or other American cities has not lately conjured the image of a war with you-know-who in which power by air can be projected across the Atlantic straight into America?

In this way, this jolting, Manhattan-under-attack scene in “DMZ” parallels some of our deepest fears at the moment.

Thankfully, this scene passes quickly and it is soon revealed to be a mere backgrounder to the present day in the apparent aftermath of the war.

By this time, much of New York City (probably Manhattan, it appears) has become a largely lawless demilitarized zone that divides two newly formed and warring nations that resulted from the secession of half the country.

The two new countries are apparently engaged in a perpetual state of war from which this demilitarized zone has been created as part of sporadic negotiations over ceasefires that are broken anyway.

The central storyline in this four-part limited series concerns a mother (played by Rosario Dawson) who becomes separated from her young son during the panic in the opening scene.

She now seeks to find him in the demilitarized zone, which she can only enter illegally and at great risk. Once inside the DMZ, she learns what life is like now in this part of New York City.

With the city controlled in different sectors by various gangs and self-styled warlords, she faces formidable challenges to finding her son.

In its depiction of an anarchic New York, “DMZ” may remind some of the 1981 classic film “Escape from New York” with Kurt Russell, with a little bit of “The Warriors” thrown in.

Other social and historical references include the show’s portrayal of a chaotic process of immigration between the DMZ and its bordering nations that is meant to echo the situation at our own southern border.

The very title of the show, “DMZ,” is obviously reminiscent of the world’s most famous real-life DMZ that divides the Korean peninsula between north and south.

The tensions between the two countries on both sides of these DMZs are similar, although they are also different, since the Korean DMZ is a no-man’s land where no one lives.

During the pandemic, several series turned up that told apocalyptic stories about pandemics. If memory serves, the most recent was “Station Eleven,” which premiered last December, also on HBO Max.

The arrival of “DMZ” is an indication that TV’s appetite remains healthy for churning out drama shows about the end of the world.