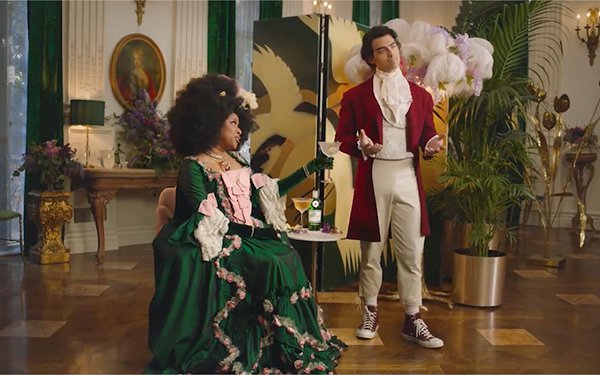 No, the three brothers on Netflix’s “Bridgerton” aren't played by the Jonas Brothers!

But yes, Joe Jonas has now teamed up with one of those Bridgerton bros -- Anthony, played by Jonathan Bailey -- in a Tanqueray campaign tied to the series' second season premiere on March 25.

So is Tanqueray, which did launch in 1830, going to be drunk on the show that’s set during Britain’s Regency Era, which ended some 10 years earlier?

No, we expect Anthony and the other characters on the romantic drama to continue indulging in the era’s favorite drink: tea.

And that’s why “tea time” has become “T-Time” in the new campaign from the agency called “the community.”

The “It’s Not Tea Time, It’s T-Time” tie-in, running through April 30, features a, shall we say, whimsical video in which Bailey dispatches “The Queen,” played in the spot by comedian Phoebe Robinson, to teach “Joseph Jonas, the First” how to be a Bridgerton in three steps: “looking fancy,” “sipping” and “dancing.”

"Watching the internet's favorite almost-Bridgerton, Joe Jonas, learning how to 'T' from Jonathan Bailey and Phoebe Robinson is a celebration of all of us who are channeling our inner Bridgerton and gearing up for season two," explained Magno Herran, Netflix’s vice president of marketing partnerships.

In addition to YouTube and the Instagram channels of its three stars, the video has been placed by PHD Media across lifestyle and entertainment-focused properties like Clevver News, Elle and Entertainment Weekly.

“Bridgerton” viewers and/or Tanqueray drinkers are also invited to show off their own “looking fancy,” “sipping” and “dancing” videos or photos via social media for a chance to win hotel accommodations and VIP access to The Queen’s Ball, an immersive Regency-era experience coming to New York City. A stylist will even dress the winner in Regency-era regalia.

Other prizes include a “Bridgerton” watch party and a “Regency-Era Live Oil Painting.” Both of these accommodate up to 10 friends in a “lavish hotel suite or viewing location,” with the latter involving a stylist costuming everyone in “Bridgerton”-inspired finery, and a painter rendering a Regency-era group painting.

Via CocktailCourier.com, Tanqueray has also launched three “Bridgerton” cocktail kits, available from $71.99. Each features a bottle of Tanqueray, plus custom glass teacups, a gold teaspoon, and white elbow-length gloves.

For Christina Choi, senior vice president of rum, tequila, gin at Diageo, all of this represents the a reinvention of teatime for the 21st century. "Teatime in the Regency Era was the epitome of elegance," she said in announcing the campaign. “With the second season of 'Bridgerton' on the horizon, I think it's the perfect time to bring this grand tradition out of the sitting rooms, drawing rooms and garden gazebos of yore to give it a fresh, modern-day twist.”

Tanqueray noted that teatime was once “one of society's fanciest occasions; a moment to gossip, flirt, laugh with friends and of course, sip in superior style.”

But why sip tea when you can sip T?