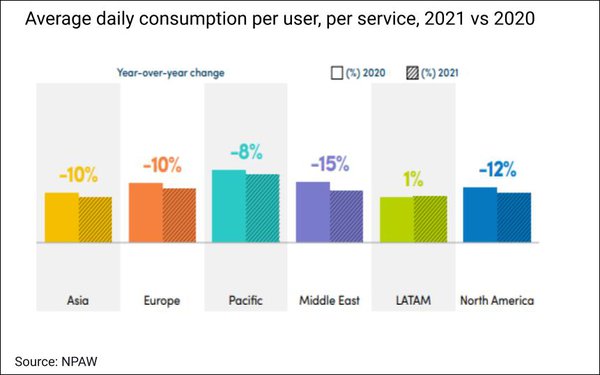 Average daily consumption per user (chart above) declined by 12% year-over-year in North America, 15% in the Middle East, 10% in Europe and Asia and 8% in the Pacific. Only Latin America saw a small increase: 1%.

Engagement time did pick up in all regions during the second half of 2021 — although it’s too early to say whether this will continue in 2022. 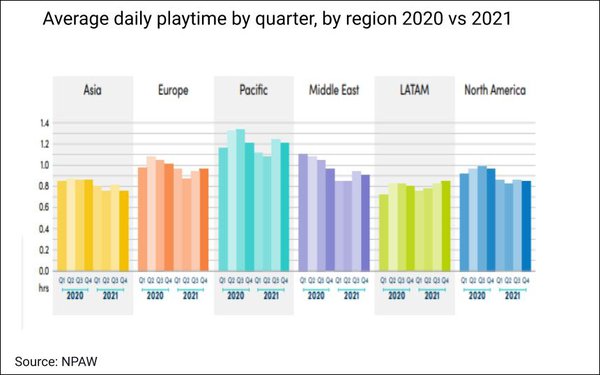 Asked if they think that the 2021 trend to more streaming users but less time per service is here to stay, 26.5% of industry executives deemed that likely and 11% very likely; 29.2% said it is not very likely or not at all likely; and 33.6% were undecided.

NPAW also found completion rate per play continuing to decline in all regions except the Pacific and North America. Average effective playtime was flat or down across regions — which tends to indicate switching caused by dissatisfaction with content. 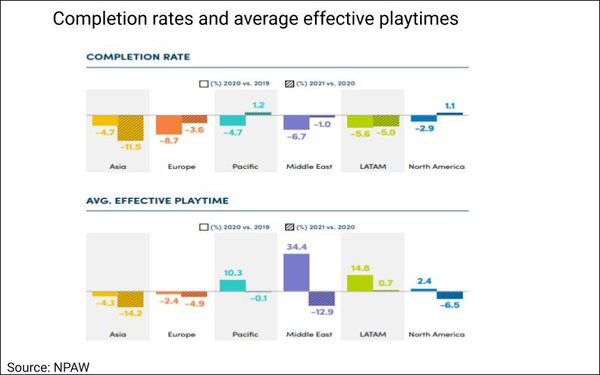 Quality-wise, average bitrate across the regions increased by 11.1% year-over-year, compared to an improvement of just 3.2% in 2020 versus 2019. North America and the Middle East saw more moderate gains, reflecting that their bitrates were already high and approaching target levels.

However, improvement in those areas is often associated with longer start times for videos. Start time (or join time) rose 5% on average across regions (and 1.3% in North America) after declining by 8.8% between 2019 and 2020.

In the Pacific region, where join times were reduced by 21%and 25% YoY over the past two years, exits before video starts (EBVS) declined by 29% and nearly 33%, respectively.

The report predicts that the quality of sports streaming will continue to rise in 2022 as providers put more focus on it, in line with growing consumption.

Device-wise, shares of VOD consumption time have remained been fairly stable in recent quarters, with larger screens continuing to dominate. 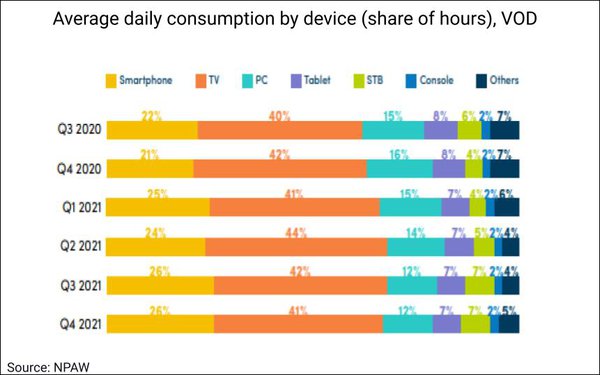 For comparison, looking at linear TV data, average daily playtime/consumption rose 3% on average, but varied widely by region. Latin America and Asia saw 13% and 10% gains, respectively, and the North America and the Pacific saw gains of 3% and 2%, respectively. However, the Middle East had a 14% decline, and Europe a 6% decline.

Linear TV’s consumption is much more dependent on local preferences and trends than video-on-demand, notes the report.

Linear quality and the metrics associated with it have by and large reached stability.