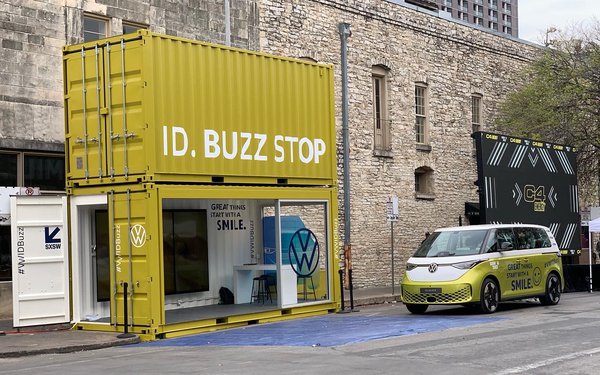 AUSTIN, Texas — Volkswagen and Porsche marked their sponsorship debut at the South by Southwest festival this month, and the VW ID. Buzz van was the belle of the ball.

With its unofficial slogan “Keep Austin Weird,” the city is decidedly not like the rest of the state. Home to both the state capital and a large university, the nickname fits.

So it felt like a natural environment to show off the VW ID. Buzz, which pays homage to the iconic VW Microbus of the 1960s “hippie” era. But don’t be fooled by the fun and colorful exterior — the electric vehicle’s high-tech interior and sustainably crafted design features definitely make it a vehicle of the future.

The thousands of visitors who flocked to the first pandemic-era SXSW (colloquially referred to as “South By”) were largely a cross-section of creatives and visionaries from the film, music and tech industries. They couldn’t get enough of the ID. Buzz as it was driven around Austin.

Passersby stopped in their tracks to take photos of the vehicle, which also was featured in a static street display downtown. Product specialists were on hand at the “Buzz Stop” to answer questions and take contact information from prospective customers.

In 2019, the last time SXSW was held in person, more than 230,000 people attended the festival and 62 countries were represented. One out of every four badge-holders in 2019 was from another country.

Organizers say this year’s turnout was slightly smaller than 2019, partially due to the number of international attendees not coming because of COVID-19.

But the streets of Austin still seemed crowded, especially near where VW had set up camp.

Down the street, Porsche had a large exhibit called “Porsche Unseen” featuring iconic models including the actual “Sally Carrera” vehicle which was featured in the Pixar movie “Cars” some 20 years ago.

Pixar and Porsche are once again joining together to build a brand new, street-legal Porsche 911 inspired by Sally Carrera. Only one will be made and it will be auctioned, with all proceeds going to charity.

Conference-goers were invited in to tour the handful of vehicles. The automaker also hosted four concerts, which were at capacity (300 guests each night). One of the artists was Paris Jackson, daughter of the late Michael Jackson.

The Porsche space, which looked like the surface of a giant design desk, offered creative attendees a stage to present their visions and projects. The space encouraged conference-goers to exchange ideas with designers and engineers from the brand and with Porsche Digital team members.

Both VW and Porsche didn’t sign on to their three-year sponsorships until just after the first of the year, which was fairly close to the event that officially ran March 11-20.

Scott Keogh, president and CEO of Volkswagen Group of America, said he looked at this year as a chance to observe and get a sense of what the festival has to offer sponsors.

“Now, we can start planning for next year’s event, and we have an entire year to do it,” he says.

Keogh says events like SXSW can help automakers connect with consumers in a way complementary to auto shows.

Even without a lot of lead time, both VW and Porsche made a big first impression at the conference. 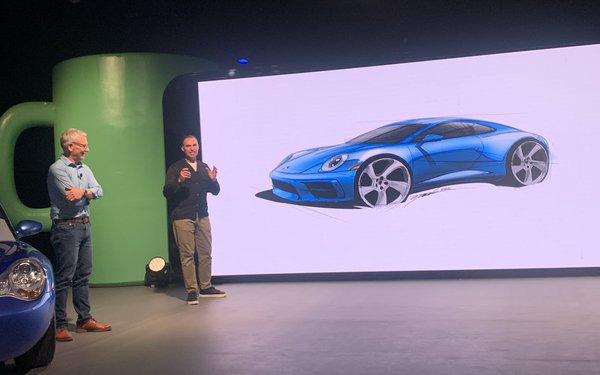