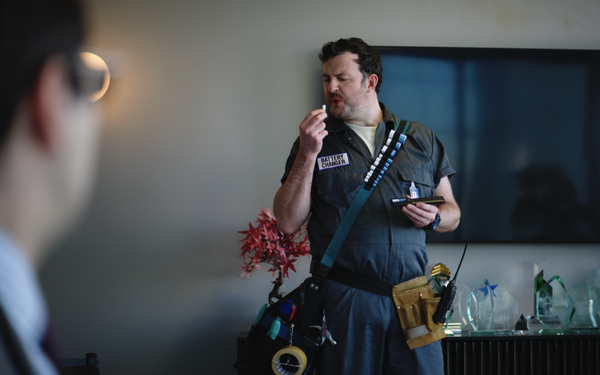 The ads are running in both the U.S. and U.K. across online video, digital banners, social, paid search and direct marketing, with additional trade show support. The campaign is running through 2022 and possibly longer.

Wunderman Thompson handled the creative; Jellyfish is the media agency.

The deadpan ad humor is meant to highlight the batteries’ real cost, in both time and money. Jason Berry, creative director at Wunderman Thompson said: “B2B advertising is often stale and unengaging … It’s time to have fun with a subject that is normally prosaic and functional.”

In one 30-second spot, a staffer point out to his boss how much the company will save without a full-time battery changer. The boss is stunned by the ridiculous cost, as the changer smashes the office clock while trying to change the battery.

The spot ends with the line: “Procell. Replace Less. Save More.”

Another spot features an office worker who doesn’t require any battery replacements, but the changer remains. The line: “If you pay less for batteries, you might pay more for labor.”

Steve Pilcher, Duracell global brand director, said: “We believe very strongly in the power of driving an emotional connection with our buyers, just like we would in the retail world, to differentiate ourselves and build top-of-mind awareness.”

In 2020, COMvergence reported Duracell spends about $84 million on media globally, $55 million of which is spent in the U.S.