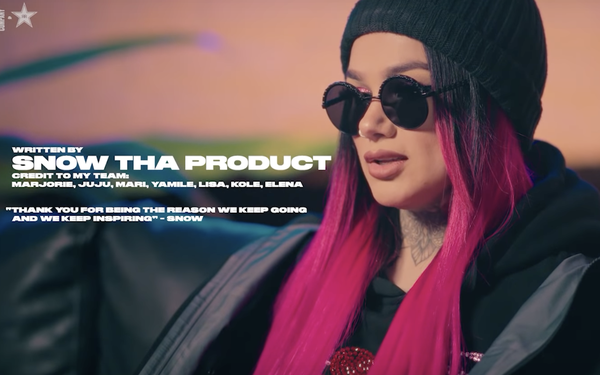 PepsiCo’s latest campaign for Rockstar Energy seeks to deepen its ties with Hispanics through a partnership with female rap artist Snow Tha Product.

“Cobrar” takes the form of hip-hop-infused "corrido"—a popular form of poetic songwriting originating in Mexico that creates a narrative through a rhythmic ballad.

Three other videos share family photos of Nino-Tapias, Buezo and Gonzalez as they trace the roots of their success.

According to PepsiCo Energy CMO Fabiola Torres, 14% of Rockstar consumers are Hispanic.

“Rockstar Energy was founded in the West and has a legacy of engaging with Hispanic consumers through product innovation—and our consumer base actually overindexes with Hispanics,” Torres tells Marketing Daily. “This year we are going one step beyond by partnering with an iconic Hispanic talent such as Snow Tha Product and working with her to tell the story of the Hispanic community’s hustle. And it’s only the beginning.”

Two years ago, PepsiCo acquired Rockstar for $3.85 billion. Since then, PepsiCo has been rejuvenating the brand while pivoting from an association with such events as extreme sports to widen its appeal.

According to Kantar data—which tracks paid search but not social media—Rockstar spent virtually nothing on traditional media in 2020.

In April of 2021, Rockstar launched a campaign that highlighted a delivery driver, office worker and a “bedroom rapper,” as seen in this commercial.

In a Q4 earnings call with financial analysts last month, PepsiCo Inc. CEO Ramon Laguarta described efforts to re-energize Rockstar as “the most complex transformation. We repositioned the brand. We changed packaging.

At retail outlets tracked by Nielsen in early March, Monster—of which Coca-Cola Co. owns 17%—and Red Bull had a combined 74% share of the U.S. energy drink market.