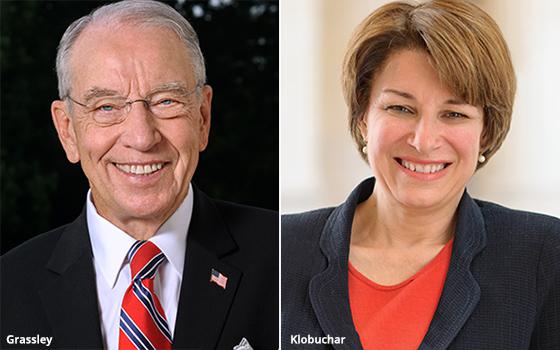 The Justice Department is backing an antitrust bill that would prohibit the largest tech companies from favoring their own products or services.

“The Department views the rise of dominant platforms as presenting a threat to open markets and competition, with risks for consumers, businesses, innovation, resiliency, global competitiveness, and our democracy,” Peter Hyun, an acting assistant attorney general, said Monday in a letter to leaders of the Senate Judiciary Committee.

Hyun's letter comes two months after the Senate Judiciary advanced the “American Choice and Innovation Act” -- a bill introduced by Senators Amy Klobuchar (D-Minnesota) and Chuck Grassley (R-Iowa) that would impose new restrictions on the largest tech companies. The letter was first obtained by The Wall Street Journal.

Among other restrictions, the bill would ban large platforms (meaning at least 50 million active monthly users) from drawing on another business's data to complete against it, and from returning search results that are biased in their favor.

Hyun writes that the bill, if enacted, would “clarify the antitrust laws,” while also giving regulators more avenues to challenge companies that engage in “discriminatory and self-preferencing conduct.”

“Discriminatory conduct by dominant platforms can sap the rewards from other innovators and entrepreneurs, reducing the incentives for entrepreneurship and innovation,” he writes. “Even more importantly, the legislation may support the growth of new tech businesses adjacent to the platforms, which may ultimately pose a critically needed competitive check to the covered platforms themselves.”

The bill cleared the committee in January by a 16-6 vote, but is expected to be amended before a vote by the full Senate.

But larger businesses, including Google and Amazon, oppose it.

“If you search for a place or an address, we may not be able to show you directions from Google Maps in your results,” Kent Walker, Google's chief legal officer, said in January blog post.