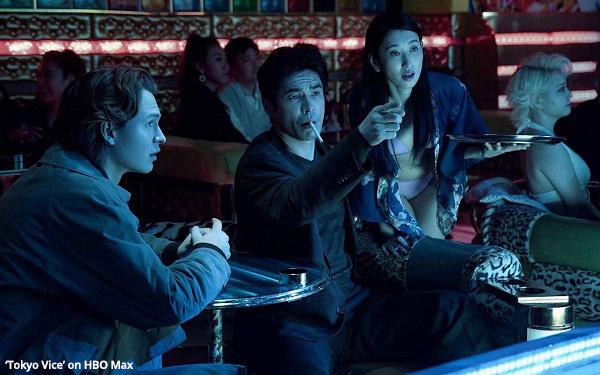 You will find no naysayers around here for a new one -- “Tokyo Vice,” premiering Thursday on HBO Max.

This show has all the elements that fans of Japanese organized-crime dramas crave -- namely, an array of frowning, secretive, ritualistic gangsters in dark suits and cool shades populating the seedier precincts of wild Tokyo.

Here in the bars and bawdy houses, everyone sneers surreptitiously at everyone else and voices are occasionally raised followed by the turning over as chairs as street toughs rise to face off.

Into this world of dim lights and narrow, alley-like streets strolls a young American recently arrived in Tokyo from Missouri.

The young man, Jake Adelstein (played by Ansel Elgort, pictured above left), is first seen in 1999 living in Tokyo and teaching himself Japanese, both speaking and writing it.

We then learn that he has taken this deep dive into the country’s language and culture (including taking lessons in the martial arts) in order to qualify to join the staff of Japan’s largest newspaper.

According to the show, jobs there are so sought after that applicants are required to take a rigorous written test not unlike an SAT in a large room with a hundred other applicants just to be considered for an interview.

Lo and behold, Jake qualifies and becomes the first non-Japanese ever to join the staff of this newspaper, although as the only American and an American Jew at that, he struggles to fit in -- at least at first.

“Tokyo Vice” is a stylish, eye-catching and entertaining limited series consisting of eight episodes. The first three will be available starting on Thursday (April 7) followed by two new ones each on the two following Thursdays (April 14 and 21) and then the series finale on Thursday, April 28.

The premiere episode, which the TV Blog previewed last week, was directed by Michael Mann, who was once the showrunner on “Miami Vice.”

Since the time frame of “Tokyo Vice” spans the years 1999-2001 (at least at first), it is accurate to position this Tokyo newspaper and its crowded, bustling newsroom as an enterprise at the peak of its circulation and power -- as many big-city papers were back then before the Internet came along and spoiled everybody’s fun.

But soon after joining the paper, Jake is startled to learn that the paper and its editors are so risk-averse that they become angry when he digs deeply into a murder case and learns things about it before the police do.

While the whole scenario that underpins “Tokyo Vice” might seem unlikely -- young American Jew from the University of Missouri gets job at giant all-Japanese newspaper -- it is at least “loosely inspired” by the real-life story of an actual Jake Adelstein, who worked the police beat as a journalist in Tokyo in the late ’90s and wrote a book about it.

May the story of how this journalist’s memoir morphed into a sexy Tokyo-based thriller for HBO Max (and presumably earned this journo a chunk of change) be an inspiration for the rest of us.

Perhaps now someone will take me up on my idea for a show about a TV critic turned amateur sleuth who solves the tough murder cases the local cops cannot by applying everything he has ever learned from TV mysteries -- from “Perry Mason” to “Murder She Wrote.”

All this idea needs is a title. Any suggestions?