McClure's Mimics Legal Services Ads For Those 'In A Pickle' 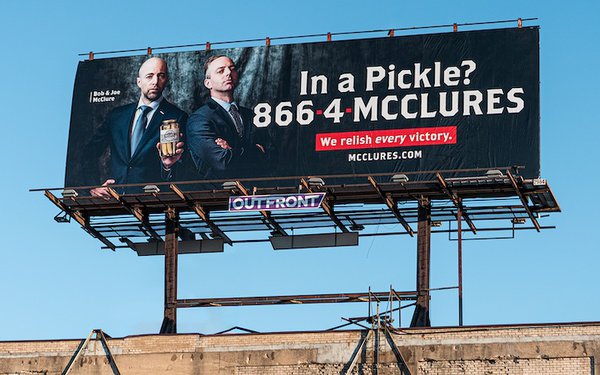 If you’re in a pickle, why call a lawyer when you can reach out to a pickle company?

That’s the gist of a whimsical campaign for McClure’s Pickles that pokes fun at the proliferation of personal-injury legal services ads.

It began with out-of-home billboards in the metro Detroit area and a posting on Instagram displaying the number 866-4-MCCLURES along with the notation “We relish every victory.”

Callers are greeted with the recorded voice of Mike McClure—father of McClure’s co-owners Bob and Joe McClure—posing such questions as “Have you or someone you love been positively affected by pickles? Does the sound of an opening pickle jar distract you?"

The recording ends with McClure offering a promo code for 20% off on website purchases while noting there’s no legal advice involved. “It’s a joke, but the deal is real.”

Results from the OOH and social media “In A Pickle” campaign prompted McClure’s to create a video that’s running on digital platforms and television.

The spot, from the Lafayette American agency, opens with Bob and Joe introducing themselves in an office setting that intermixes law-office trappings like scales of justice with plenty of pickles.

The OOH billboards were posted along high-traffic, interstate highways. “They were sandwiched in between a bunch of lawyer ads,” says Lafayette co-founder and chief innovation officer Ben Bator.

“It’s kind of like a free-for-all,” adds Bob McClure of the lawyer ads.  “They’re even to the point where they don’t even advertise their [legal] services. It’s literally just their face—there’s no phone number. They’ve become so ubiquitous, you just recognize them.”

According to Bator, online store sessions are up 9% due to the campaign. “We also have seen a 60% increase in Canadian visitors” due to OOH placements on roads that connect Michigan with Canada."