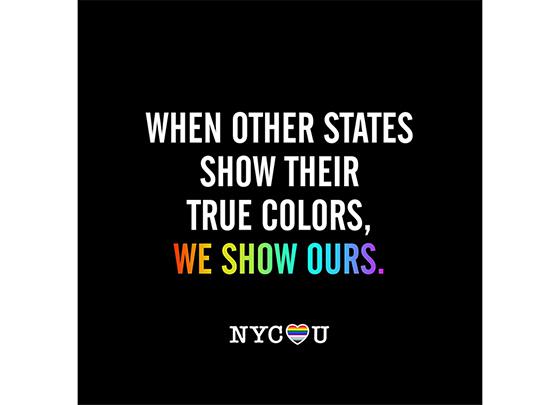 New York City has weighed in on a controversial Florida bill.

Florida's Parental Rights in Education, dubbed the “Don’t Say Gay” bill by critics, limits discussion of sexual orientation and gender identity in classrooms in the state. It’s even caused a problem between Florida Gov. Ron DeSantis, who supports the legislation, and Disney CEO Bob Chapek.

The billboards are expected to deliver 5 million impressions.

“I am the mayor of New York City, but I have a message for Florida’s LGBTQ+ community — come to a city where you can say and be whoever you want,” said Mayor Adams.

The campaign will also stream on Twitter and LinkedIn.

Creative content for the campaign was donated by WPP companies, VMLY&R, GroupM, BCW, H+K Strategies and Kinetic to underscore Adams’ administration’s commitment to the LGBTQ+ community and preserving free speech. No tax dollars were used for the effort. The monies come via Vice and Vox media donations.

“Florida’s ‘Don’t Say Gay’ bill is the latest shameful, extremist culture war targeting the LGBTQ+ community,” added Adams. “Today, we say to the families living in fear of this state-sponsored discrimination that you will always have a home in New York City.”